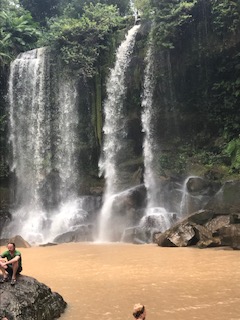 I have seen some unbelievable sights from remote villages and markets in the middle of a lake, to Buddhist temples on top of hills! I’ve had the opportunity to learn so much about Cambodia, its people and its culture.

Our first stop was Phnom Penh were we learnt about the dark past of the Khmer Rouge and their regimes, visiting S21 which was very moving. After three days exploring the capital we left for Camp Beng Pay.

On the day we arrived we were given a water blessing by the local monks for good luck. Our task was to help the local community by digging wells and toilets, making concrete rings which were used in the project. We had to mix all the concrete by hand and pour it into moulds to make the rings rather than buying the precast ones usually used. During our time in Beng Pay we managed to finish two wells and a toilet, meeting the family who will benefit from the well and toilet we built whilst we were there.

The next camp was Stoung where we worked at a local primary school building a path from the school gate to the classroom so that children can get to their classroom without getting covered in mud and water during monsoon rains. We mixed the concrete by hand for the path tiles, moving the mud so that we could lay the bricks to form the path. We also had the opportunity to teach English to the children which we all enjoyed very much.

We then went on a jungle trek which was over 50km long where we walked up hills, past streams, through old elephant sanctuaries and bat caves – not forgetting we learnt how to make bamboo sticky rice like the locals. On the first night we stayed on top of a massive hill in hammocks however, in the night we had a storm so it was freezing! The other two nights we stayed in Buddhist temples but on the third day of walking we had a storm for the last 3km which was very interesting! At the end of the third day trekking we arrived at a waterfall and pool where we all jumped in which was perfect.

At the end of our trek we stayed in Siem Reap for three nights where we visited lots of different temples and learned about the culture including visiting Ankor Wat.

Our last camp was Beng Mae Lea were we made lots of clay and concrete pots to hold water for the locals. These are needed because where the camp is located the water table is very low so wells can’t be made so the pots are made in monsoon season to hold rain water for families.

We left Cambodia on 11 August and arrived back in the UK on 12 August. I can’t believe how quickly the month went by. I met some amazing people, helped some wonderful local families and have made memories and friends which will last a lifetime. When I set about raising the money needed for this trip it seem such a massive task but with your generous donation you made it possible for me to take part in this life changing adventure! Thank you!