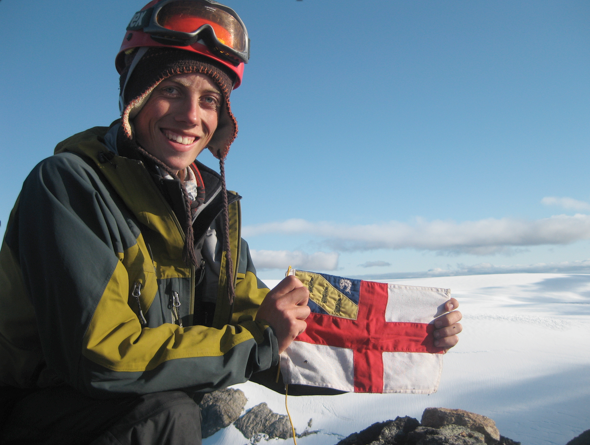 This summer instead of InterRailing around Europe or spending a week partying on a Mediterranean Island, I celebrated the end of exams and school by spending five weeks in Arctic Norway.

Towards the end of July myself and 70 other like-minded Young Explorers and Leaders travelled to the Øksfjordjøkelen ice field for a mixture of adventure and scientific fieldwork. During the first few days in the area we spent our time sorting out all our food and equipment and getting adjusted to camp life and it wasn’t until day four of the expedition that our fire’s (group) mountain training phase began.  This consisted of one hill day learning about safe movement on terrain such as scree slopes, one day learning the necessary skills for glacier travel and one day putting these skills into practice on the glacier.

My fire’s next 10 days was spent on the ice exploring everything that it had to offer.  From a central base on a nunatak (an exposed peak not covered by snow) where we stayed for several nights we explored some ice caves in the south of the ice cap whilst also visiting the glacier that 10 years ago was the last glacier on mainland Europe calving directly into the sea, however due to increasing air temperatures it has retreated much further up the valley.  It was a three and a half hour hike to the south of the ice cap and the majority of this time was spent in a white out, as we were roped up for safety and had no one to talk to for the entirety this was an eerie experience.

Once our spell on the ice cap was over we headed down into the valley with the intent of exploring a glacier melt water lake along with a fjord.  This plan, however, was scuppered as the terrain was almost impenetrable for a group with heavy packs so we had to turn around and head back down to the valley.  At the time this change of plan seemed to me as a failure however we managed to turn it into something positive and conducted a 24 hour solo experience on the side of a large glacial valley.

At the three week stage almost half of the party left us which meant a lot of rearrangement of all of the fires.  At this point we had a few options, either spend ten days around the fjords, ten days on the ice cap, or five days on each.  As I chose this expedition for the experience of the ice I chose to spend all ten days doing various activities up on the glacier.  It was during this time that I had my favourite experience of the entire expedition- a complete circumnavigation of the ice field.
A group of ten of us only carried the essentials which meant no tents as we wanted to have light packs so that we could do it in two days.  On the first day we travelled all the way to the south once again stopping on various rocky outcrops on the way to soak up the awe-inspiring views which, for me, were made even better as all the valleys below us were filled with a cloud inversion leaving only the higher peaks and ridges visible to us.  We slept at the south a mere two metres away from the glacier for just over an hour before waking and setting off on the next leg of the trip which led us up the east side of the ice cap stopping at the three nunataks on the way to the highest rocky point in the Finnmark region of Norway.  As we had only had a short sleep the night before we decided to take a few hours rest here where most of the group that we named ‘Team Extreme’ chose to sleep.  Once we were all rested to an extent we set off on a five kilometre trek to that evening’s bivi spot; an amazing ledge two metres away from a 400 foot sheer drop.  The view from here was unbelievable, we could see down the valley to where our base camp and mountain camp were, we could see down the extensive fjords and we could also see over the entire ice cap; we had these views whilst also watching an incredible sunset, all from inside our sleeping bags.

During the next week that we had on the ice we made the most of the good weather doing some more ice climbing, visiting a set of snow caves and also setting up various rock climbs around our ‘ice camp’ area.  Not only did I enjoy taking part in these activities I also learnt numerous skills such as setting up rock anchors to belay people from as well as how to use ice screws in order to set up a fixed line for safe travel in the snow caves.  For our last night on the glacier a small group of us set off to a ridge off the western edge of the glacier, at the spot height of 962 metres we were only just above the cloud line which meant that the conditions were just right for a Brocken spectre to appear which is an enormous shadow of ourselves projected onto the clouds which is encircled by a rainbow.

The next day as we headed down the glacier back to base camp it really felt like the end of the expedition as for the following few days we had to pack up our base camp so that the area was returned to its natural beauty.

I feel privileged to have spent five weeks in such a wondrous place with such amazing people, many of whom will be lifelong friends.  I am glad that I was able to prove to myself that I could not only cope but thrive in such a remote environment and my confidence has been boosted as a result.  Whilst I do enjoy the comforts of home and being with my family and friends I most definitely miss the simplicity of expedition life along with the peace and quiet of the Arctic.