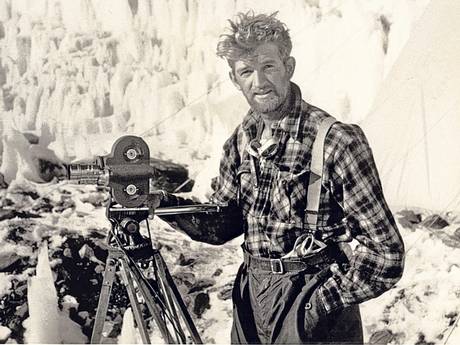 George Lowe, the mountaineer, who has died aged 89, was both a key member and the last survivor of the 1953 British expedition that conquered Everest.

In early 1974  a new HMI was appointed with the remit of Geography and Outdoor Education plus acting as General Inspector for North East Derbyshire. He decided to pay a visit to Shirebrook School, a pit village comprehensive on the Derbyshire Coalfield, to inspect the workings of the Geography Department. I was the head of the Department at the time and had little notice of his impending visit. Moreover it coincided with me having access to the film of the eruption of Heimay  volcano in Iceland  for one day only, its first showing in the UK. He found that every geography lesson he attended was two or three classes watching the film so that by the end of the day he had seen it some six times! This phased him not one little bit as he firmly believed that teachers should take any opportunity to enthuse their charges even if it was not always on the syllabus. It transpired later that he had really come to the school to learn more about the youth expeditions to Iceland and Arctic Norway we had run in the past and the Iceland venture happening that summer. The geography department inspection was merely his excuse to hear about the expedition and to offer his help and advice.

Twenty years before that George had been a great influence in my teenage years which covered both the Ascent of Everest and the Crossing of Antarctica. Little was I to know then that our paths would meet later on and that I would work with George in many ways and he would support our expeditions so wholeheartedly.

George was born and bred in New Zealand where he was the seventh child in a family of eight. He became a teacher and a mountain guide teaming up with Ed Hillary on many climbs in the Southern Alps. In 1951 he was a member of a New Zealand Himalayan expedition which scaled some six peaks over 20.000 feet. On the strength of this experience, he and Hillary were invited in 1952 to join Eric Shipton’s assault on Everest’s neighbour, Cho Oyu (26,850ft), which in turn led to the Everest Expedition in 1953. In his teenage years he developed a lasting interest in photography and this was to play a major part in recording the successful ascent of Everest. In many ways he was the strong man of the expedition preparing a lot of the route up to the South Col and to the final camp. When his long-time climbing partner Ed was teamed up with Sherpa Tensing George was their support team and in the event of their failing would most probably been in the second attempt on the summit.  According to John Hunt (later the first President of YET)  the expedition’s leader, Lowe “put up a performance which will go down in the annals of mountaineering as an epic achievement of tenacity and skill”.

With his reputation on ice and with film established, George was recruited as official photographer in the Trans-Antarctic Expedition of 1957-58, which made the first successful overland crossing of Antarctica via the South Pole. He joined the 12-man party of the expedition leader, the British explorer Vivian Fuchs, ( later another President of YET)  Fuchs relied on Lowe’s expertise to spot crevasses that were, Lowe later noted, “wider, deeper and harder to detect” than any he had previously encountered, and as expedition photographer.

From 1958 George was an active leader with the John Hunt Exploration Group which took youth expeditions to Greenland, Greece, Ethiopia and the Pamirs. Then, after 4 years as a geography teacher at Rugby School he became deputy principal, then principal of the Grange School, Santiago, Chile. After General Pinochet’s coup in 1973, he settled in England and joined the Department of Education and Science as an Inspector of Schools, which he remained until his retirement in 1984. During this time he really encouraged schools of all types to extend their use of the outdoors.

I feel very privileged that I could meet, work with and befriend a man who had featured so strongly in my youth, someone who had achieved so much although perhaps not celebrated as much as he deserved by the general public.  His at times rather easy going approach cloaked a sharp intellect and belied the strength and tenacity which has served him so well on mountains and glaciers. Another fond memory of him I have is when in the mid 1980’s he turned up at my home to borrow some crampons for his son to use in the Alps To my delight and amazement  this veteran of Everest and the Antarctic actually had to ask me how they fitted onto boots!

An inspiration to many at the time, he was also an inspiration to many teachers and youngsters in Derbyshire and further afield. In retirement he helped found the Sir Edmund Hillary Himalayan Trust in Britain, established to improve conditions for Sherpas in the Himalayas, including raising funds to build schools and clinics thus helping the youth and people of the country where he had achieved so much.Ted Grey March 2013