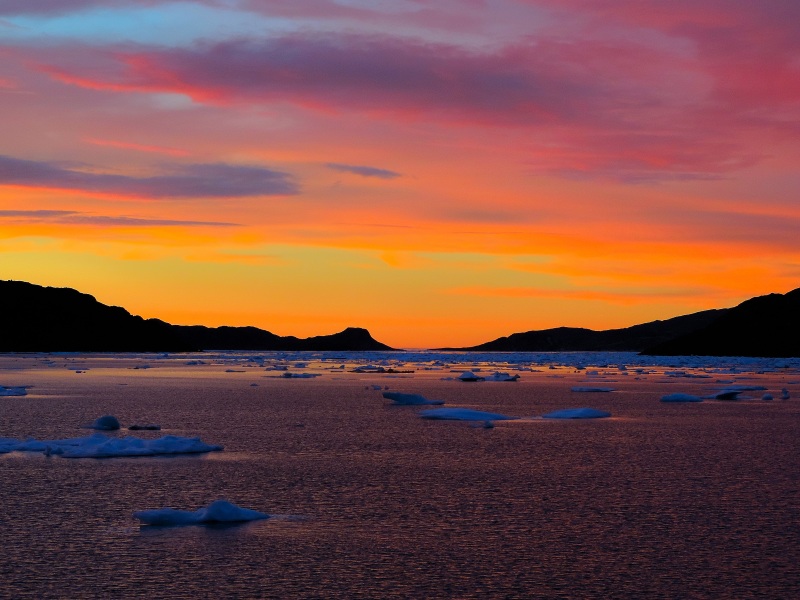 I took part in an expedition organised by Students on Ice, a Canadian environmental and youth charity. I joined over 80 students and 30 mentors and specialist leaders on the expedition vessel, the Sea Adventure, on a voyage to northern Labrador and southern Greenland during June and July. I have always had a fascination for the Arctic and love getting into wild places like the mountains around my home. I was really pleased to get the opportunity to visit the Arctic with Students on Ice as it fulfilled a lifelong ambition to see the landscape, observe the wildlife and see how both the communities and wildlife have adapted to the harsh conditions of living in the Arctic. 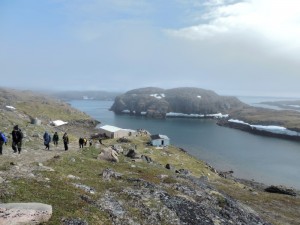 The expedition route from Kuujjaq followed the coast of Nunavik in Northern Labrador to the Base Camp and Research Station (some 200 km north of Nain), stopping off en route to explore the coasts, fiords and islands of the Torngat Mountains National Park. Park Rangers gave presentations on the National Park, its environment, culture and challenges. I visited local communities and learnt about their culture, how they sustained their economy and how they lived within the environment. We went for walks from the zodiacs into the mountains and we explored the coasts. 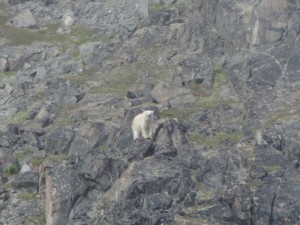 I had many memorable moments in this part of the trip including seeing my first polar bear and first arctic fox in the wild.  We woke up one morning on the ship, it was cold and there was fog hanging on the fiord. We were in Nachvak Fiord in Ramah Bay. It was here that we saw our first polar bear from the ship. It was very far away and sadly by the time we landed it had been spooked by the scouting zodiac so had moved away. I wish I could have seen it closer. It was a momentous occasion for me. I have seen a polar bear in a wildlife park close to home but it was so special to see one in its natural surroundings. 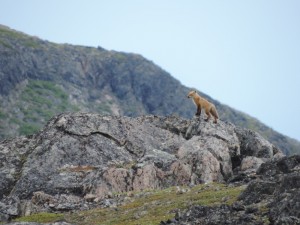 I could not believe our luck when we saw two more polar bears on this same day, including one that was swimming in the sea, close to the zodiacs when we were exploring the fiord. A few days later we arrived in Torngat National Park Base Camp. After having been given an introductory tour by the Park Rangers we were given the opportunity to go on a hike.  On the hike I saw an arctic fox standing on a rock on the hillside. Shortly after, it was joined by another fox. Again, I have seen arctic foxes in the wildlife park at home but it was a real privilege to see them in their own environment. 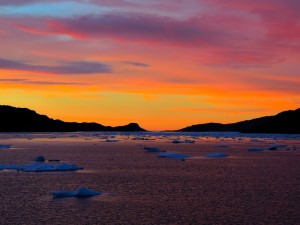 I had heard before I went on the trip about the midnight sun and the spectacular sunrises and sunsets, but nothing had prepared me for how spectacular they were. It was well worth staying up through the early hours to experience these stunning lighting effects. When the light was at its darkest the icebergs were silhouetted against a coffee coloured sky. With more light the sky was a kaleidoscope of different shades of yellow, orange, pink, purple and blue. This was especially impressive when the foreground was sea ice floating on the water.

The expedition then crossed the Labrador Sea with many sightings of various species of whales and marine birds. A really magical moment was when we were crossing the Labrador Sea and I was stood on my own at the back of the boat when I was surprised by separate groups of fin whales and pilot whales swimming by. Shortly afterwards I saw some seals bobbing along beside the boat and later some otters played alongside the boat. 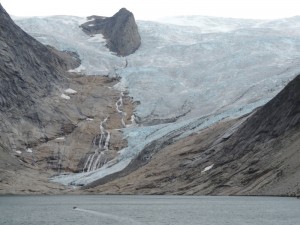 The expedition landed at Nanortalik in southern Greenland and then spent several days with the ship heading north visiting communities, exploring the glaciers, observing the Arctic habitats and visiting historic Viking settlements before the expedition finished at Kangerluusuaq, inside the Arctic Circle. I was really impressed by the size and scale of the glaciers and it was fantastic to get the chance to explore them on foot.

I especially enjoyed going ashore from the expedition ship in the zodiacs and spending time walking in the mountains. It reminded me of home, though the mountains in the Arctic were bigger than the mountains I am used to in Scotland. Also, whilst we have no glaciers in Scotland left now, in time with climate change, Greenland might start to look even more like a bigger version of Scotland.  I was drawn to make comparisons between communities in the Arctic trying to sustain their future with small, remote communities like my own in Scotland. Whilst there is a difference in scale, both rely on sustainable use of the natural resources they have and both are increasingly relying on income from visitors. 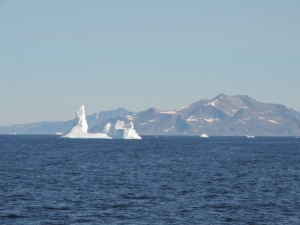 As far as the landscapes were concerned there were so many places that were impressive it’s hard to choose a favourite. However, I was really impressed by the size and scale of the glaciers in southern Greenland. I really enjoyed exploring them and imagining the forces that created them. The scale of them made me feel very small and insignificant. I loved hearing the thunderous sound of the glacier calving into the fiord. It is interesting to think of the long journey the ice makes from the glacier as an iceberg until it melts into water so far away from where it was born. The pack ice was stunning and impressive too, but it made me sad to see it and think how its extent has declined markedly due to climate change over recent decades. It is a real worry to me that it might disappear altogether in my lifetime.

As well as the shore landings and interpretative visits led by the specialist mentors there were talks and workshops every day on aspects of the environment.

The communities we met along the way were very welcoming and happy to share their experiences with us. It was interesting to see how they maintained their life in such a harsh environment. It was good to meet the national park rangers who could explain to us about the special environment that they managed. The staff and specialists on the ship came from a wide variety of backgrounds and led interesting discussions about the Arctic and its challenges especially climate change and development pressures. 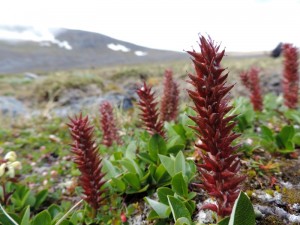 I particularly enjoyed the opportunity I had to join a specialist workshop on wildlife and landscape photography. I had an interest before I went on the expedition but I really got into it in a big way and developed my skill level with the help and guidance of the specialist photography mentors on board. They particularly helped me in composing landscape photographs in an atmospheric way and in creating successful wildlife shots. I was very pleased to get some understanding about how to take macro shots of Arctic flora which in places was very prolific.

It is still only a few weeks since my return from the expedition. It will take time for the full impact of the experience to be realised. I am still remembering new memories every day. Summing up my experience in a few words I would say that my expedition to Arctic Canada and Greenland was a once in a lifetime adventure in which I experienced some magical and unforgettable moments in a very special environment and spectacular surroundings. What mustn’t be forgotten are the dangers the Arctic faces and the need to take good care of it. 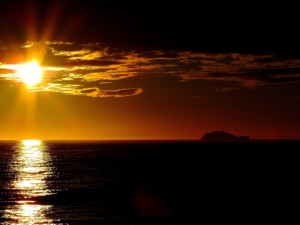 I am very grateful for the financial support I received from a number of organisations including the YET. Without it I would not have been able to undertake the expedition.