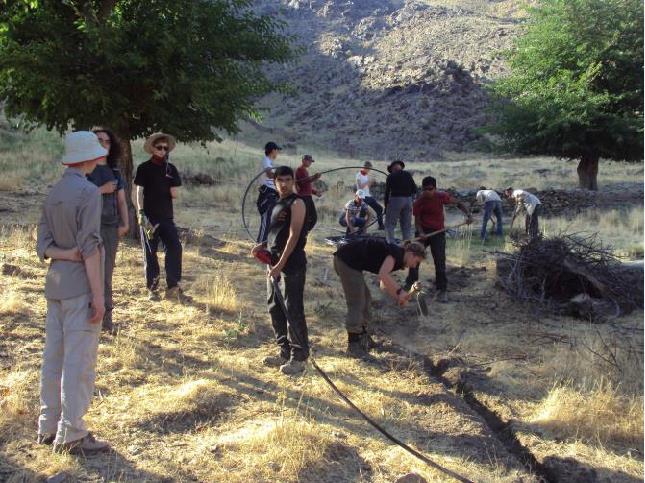 Tom Crathorne, a student at Lawrence Sheffield School, travelled along The Silk Route on a four week mountain trek through Central Asia. This  included 2 mountain treks in Kyrgyzstan and a community project in Uzbekistan. 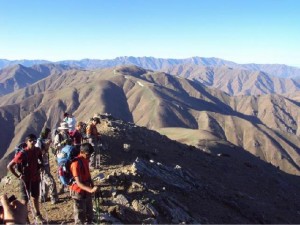 At the summit of Greater Chimgan Mountain

On my World Challenge trip, there were two main things we did – two treks, and a community project. The first trek we did was in Uzbekistan, and we climbed up to 3320m at the top of Chimgan mountain, which means “green slope” in local Turkic. We set off from the bottom on day 1 at about eleven o’clock, sun blazing, and it was an incredibly hard and gruelling day for all of us. The following day, and all days following, we woke up, packed up our tents, had breakfast and left the campsite by 6am – there was no base camp on this hike, so we had to keep pitching and unpitching our tents to take them with us. All the other days were much easier, with the climate getting cooler the higher we walked and the amazing views to spur us on. On day 5 though we had to walk up another 800m and down again even further, so a lot of the group struggled, but despite this the entire team managed to get to the summit, which was a big achievement for us all. 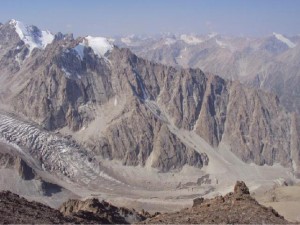 The second trek was split up into easy days and hard days, and took place in neighbouring country Kyrgyzstan. The first day we were driven to a little base at 2000m, where we did a small walk and camped the night. The following day was very tough, as the entire team with full packs on had to walk up 1200m, practically ascending the entire way. It was very warm, and the entire team struggled with the full weight of our packs slowing us down. Regardless, we ploughed on, and reached our main base camp after just 6 hours of walking. The following day, we did a small walk up to a glacier lake (it was massive, and absolutely beautiful) and back down again. Then, on day 4, we split into two teams. The people who were struggling with the walking went with Steve, our World Challenge leader, up 400m to another glacier, while the people who were feeling a little stronger went with our guide Patrick up to 4500m, and back down again. I went in the latter group, and it was incredibly tough. With the altitude acclimatisation heavily affecting everyone other than Patrick, and the daunting 1200m ascent-1200m descent hanging over us, we set off at a steady, nervous pace, but despite everyone’s fears and nerves, we all completed the walk, and had lunch on probably the highest point I’ll ever reach in my life!

On day 6, the whole team walked back down again, and were picked up by minibus, which took us onto our project. When we arrived at our project phase, we were all taken aback by how much of a micro-haven the village was. It was like a little oasis hidden inside the desolate Asian mountains! We were made to feel at home by the family who ran the village, fed VERY well, and were then shown to our project. Our task was, after 6 days, to have dug a 700m trench to connect a natural water spring down to the village’s endangered sheep herd, so that they can safely have a fresh supply of water in the dry season. This was very, very hard work, as we were all wearing full length clothes as it was Ramadan (luckily, they didn’t mind feeding us at Western mealtimes) and we were working in the blazing sun, with the temperature being 38 degrees or above! The tools the village had were very old, and after extensive use after a few days by our enthusiastic team, the majority of them had broken, so when we went to the next closest town to buy the water pipe, which was a 90-minute drive away, we also bought them a large supply of new tools, which went down a storm with everyone as it made breaking through the tough mountain rock a lot easier. By the end of the 6th day, we’d finished laying the pipe, covered it up, and had installed our labelled tap, saying our school and World Challenge team on it. We all took our photos with the tap running; it was a huge achievement for the team, we all recognised that it was and were very happy with the result. We sang some songs with the locals after dinner that night, and had a great final evening there. 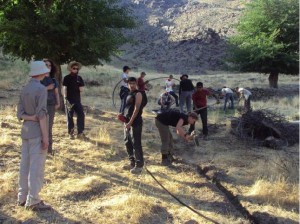 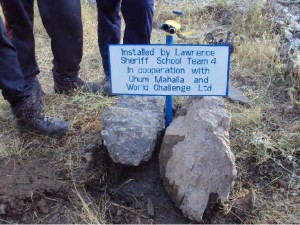 Overall, I’ve learnt a lot from World Challenge. A lot about people skills, leading a team to success rather than painful failure (as was the case with some of the ventures over the month we were away), and a lot about how to cater adequately for 12 people over 2 gruelling treks, as I was head of the 2-man food team. I also learnt a great deal about the two countries we stayed in, their history and culture and their traditions, as well as a lot about my team members and the teachers who went with us, who helped make my World Challenge experience into an immensely enjoyable one, and one which I will genuinely never forget. I definitely want to travel more in the future, solo or with someone else, as my World Challenge trip was an amazing personal experience where I faced numerous challenges and the achievement of reaching a climb of 4500m was fantastic.

Thank you so much to the Young Explorers’ Trust for donating the £200 towards my expedition fund – your kind donation helped me to go on such a fantastic trip and experience all that I did.