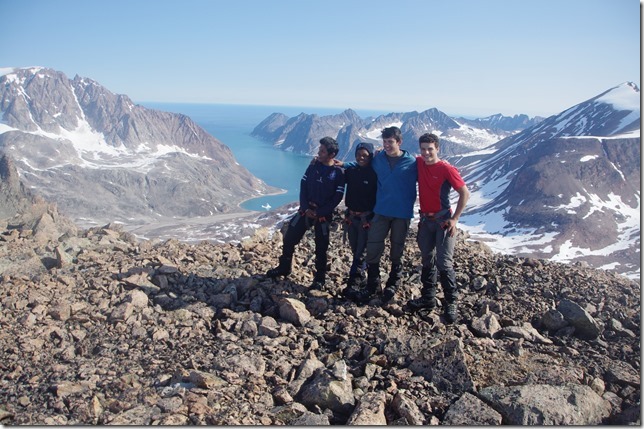 Background of the Mountaineering Club

The John Lyon School Mountaineering Club was founded in 2003 and is led by the Expedition Team Leader Ralph Durbridge, who is also the School’s Head of Outdoor Education. Previous expeditions that have been led include the likes of: Borneo, Sarawak Guyana, South America, Belize, Guatemala, Mexico, Thailand, Kenya, Uganda, Tanzania, Morocco, Vietnam, Iceland, Nepal, Swiss Alps, and various locations across the UK.

The club is open to anyone in Years 9 and above, aged 13 to 18. It allows for an unrivalled experience for the growth of life skills, setting the members up as rounded individuals for their future, as well as being an invigorating and memorable episode.

In August 2012, the School’s Greenland Expedition team completed an unprecedented exploration of Liverpool Land, East Greenland. The nine boy team spent months preparing and training for what was to be a once in a lifetime opportunity to carry out scientific and geographical research in an area where very little of this type of research has been carried out prior. In August 2013, the Mountaineering Club returned to Greenland to undertake stage-two research, focusing on the acidification of the oceans. In August 2014, the team completed the trilogy of trips that finished the final stage of the scientific research in preparation to present their findings to the Royal Geographic Society.

On the most recent expedition to Greenland, which has consummated the previous 2 expeditions to Greenland for scientific purposes, 4 boys, and 2 leaders were involved. The team members can be seen in the picture.

The preparation for Greenland 2014 dates back to 2012, when it was decided there would be 3 expeditions in total. Since then, the Mountaineering Club has raised money and awareness to support our passion. We have achieved this through obtaining grants, which The Young Explorers Trust (YET) has supported us with, and raising funds.

Additionally, skills were needed in order to complete a daunting task, such as trekking 160km over previously uncharted regions of territory on an uninhabited piece of land. To do this, we had various trips within the UK to further enhance and develop climbing and campsite-related skills.

The actual expedition began on the 27st July when the team assembled at The John Lyon School for a brief and kit-check. The following morning we made the journey to Luton airport, where we flew to Iceland and there onto Constable Point, Greenland. Due to some minor discrepancies, we were unable to take our designated mode of travel, boat, to Liverpool Land. Instead we made 2 shuttles on a Helicopter to our drop-off zone, thereby cutting out 5 days of trekking and allowing us to stay at Camp 1 for a longer duration of time.

The subsequent days were spent exploring the landscape around us whilst also savoring breathtaking views and reaching unclimbed peaks. Essentially, we were preparing for one immense day of trekking to reach our desired point, which was an 869m high peak, that later named “Corbyn’s Bluff”. 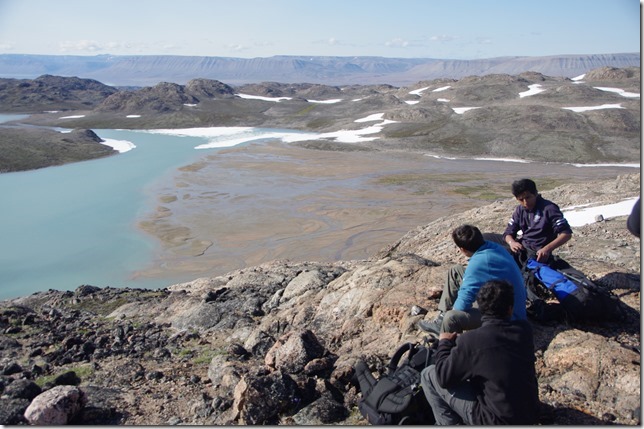 Once our time had elapsed at Camp 1, we had to make our descent in shuttles of two days, first carrying down food for later days and barrels to store them in, and then with the remainder of our kit and supplies. On our descent we had a further 2 campsites, the final from which we did our last leg of exploring. However this was sadly cut short as Musk-Oxs blocked our path and we were forced to turn back.

As our time on Liverpool Land drew to a close, we were picked up by two rib boats that landed on the shore and took our kit and us across the Hurry Fjord back to Constable Point.

From here, we completed our most integral part of the Expedition, the water-sampling research. (See ‘Science’ section). Once the data was collected, we carried on to Ittoqqortoormiit, a remote settlement, inhabited by 450 locals, but attracting thousands of tourists annually. The municipal has become so popular that small Cruise liners now stop here for sightseeing. It was here that we carried out the Social-Science aspect of our expedition as we questioned local geographer Tor about the future of Ittoqqortoormiit.

On our last night in Greenland we were fortunate enough to have been invited to a game of football with locals and foreigners on an unused part of the landing strip. The following morning, as a dust storm neared, we put down our tents for the final time and sought shelter in the waiting area. 3 hours before it was originally scheduled, we left behind Greenland and all of its wonders, for Iceland.

Iceland allowed us to relax and enjoy ourselves with the physical and mental strains that would have been present back in Greenland. It also enabled us to eat normal food once again! Whilst there we visited some attractions, including a naturally occurring lake over the site of a volcano; a geyser and the spa Blue Lagoon where our relaxation levels were further heightened.

On the 22nd of August, we returned back to London safely and we greeted our friends and family after a long 27 days away from them. Our journey had ended.

Whilst in Greenland, the essential part above all was to collect water samples to study the ocean acidification of the hurry fjord. We liaised with Plymouth Marine Laboratory and Dr Helen Findley for the previous two years and we continued this for our final set of readings. We travelled up the 45km fjord and took readings every 5km of the pH level and water temperature first at 10m below the surface level then at surface level. The responsibility was given to Solly to use the apparatus to carry out the sampling, and it was left to Rishvinder to collect the data. Following our return, the data was given to PML to study.

Also, whilst we were there, each of the members was given a role to be accountable for. Solly, as mentioned, was in charge of Science. Jamal was given the task of Art and Culture. Corbyn and Rishvinder were answerable for Geography and Physiology Research respectively. The information collected from these studies will be presented as a report to the Royal Geographic Society.

The John Lyon Mountaineering Club is continuously looking to the future for exciting and interesting expeditions. The biennial Swiss Alps trip will once again take place, where members can improve their climbing skills and enjoy a more tranquil form of Mountaineering, without sacrificing views or enjoyment. A trip to the Falklands is in preparation and the club has already started raising money and awareness for the 2016 expedition.

The club would also like to thank all the people that made this, and previous trips possible. Although only 6 people went to Greenland, it was as a result of the hard work and dedication of dozens more people who supported us with their time, effort and finance. It is no understatement to say this expedition would not have been possible with their assistance. Thank you.

Written by Rishvinder Chowdhry ,Corbyn Hales, Solly Mathias, and Jamal Jadunandan with the help of Simon Baker and Ralph Durbridge.