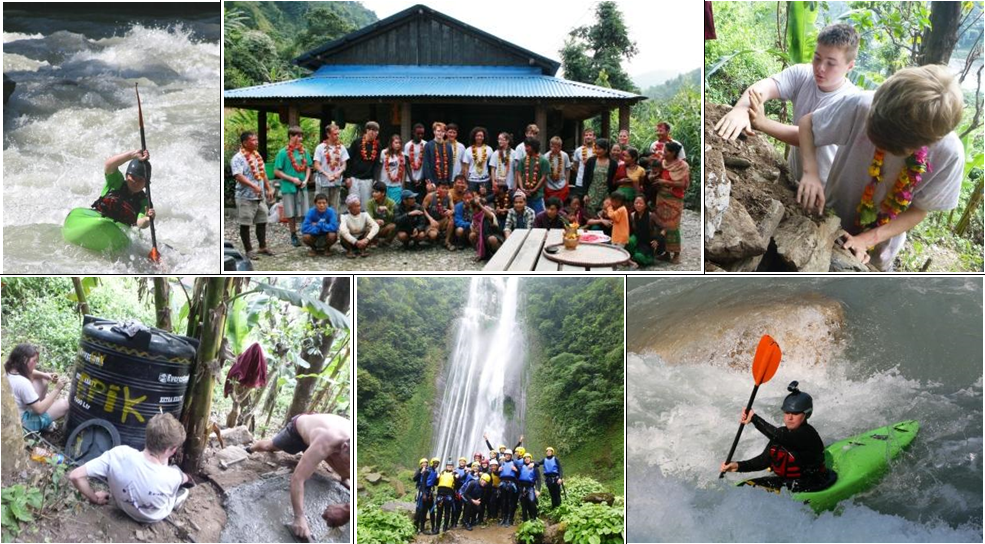 Having recently returned from a major expedition to Nepal, I am writing this report in aid of trying to share just a small glimmer of what we, as a group, experienced in Nepal.

Upon arrival in Kathmandu, I could already see that I (and the group) had entered a country that could have been from another planet!  The mountains were huge and the landscape was so different from what I had ever seen before.  The city is surrounded by mountains which are covered in trees.  The roads have no laws abiding and no traffic lights, which makes even the shortest journey a scary one.  On occasions we saw 4 people on just 1 motorbike!

The Nepalese people all come across as very helpful and kind.  Many times during the expedition I saw small men and women carrying huge weights on their backs such as food, clothes, rocks and other supplies.  Their strength amazed me and their stamina seemed never to end.  ‘Paddle Nepal’ the organisation that ran the trip is made up of three brothers.  Santosh was our Head Guide and one of the brothers.  On one of the days as an experience he took us on his route that he would have done to school many years ago that was all uphill and took us almost 3 hours to complete.  Santosh would have completed this journey in 2 hours every day during his school life.

The Kayaking, Rafting, Canyoning and Community Work were the main reason that this Expedition took place.  All together we spent around 8 days kayaking and rafting on two different rivers; the Seti and the Kaligandaki (the holiest river in Nepal).  These rivers by far had the largest rapids that I and most of the others had ever experienced.  When kayaking some of the rapids waves would crash over you and you would be submerged for a couple of seconds.  This made the experience of these rivers even more exciting and exhilarating.  When rafting you would often be raised out of your seat when going over a wave as if you were falling out – this increased the adrenalin levels going through the group.  During one of the days in Nepal I experienced for the first time ‘Canyoning’ which involved abseiling and sliding down waterfalls (sometimes backwards)!  These were not for the fainthearted as some of the waterfalls that we abseiled were at least 30ft high.

Between kayaking the two different rivers we did the Community Project work which lasted 4 days. When we had reached Santosh’s school after 3 hours of uphill walking we also did some community work at the school.  This involved cleaning up the school grounds.  We continued to walk up the mountain following that work, until eventually we reached a village that was about 4,500 feet above sea level.

At the village we entertained the children and gave them gifts that we had all brought over from England.  They were so happy as some of the gifts they had probably never seen before.  The next day after we descended from the village at the top of the mountain, we set about building a secure place to put a water tank to provide the village at the bottom of the mountain with running water.  This was done by a lot of hard physical work which involved hacking away at trees and collecting big, heavy rocks to make the platform secure.  Once that was completed we then had to make our own cement in order for the water tank to be fixed in place.  During most of our time in Nepal we slept on tarpaulins on the beach, this added to our adventure and tested our nerves on many occasions as a few times we woke with spiders and other insects crawling on us.

A few days during our time were spent sightseeing in Kathmandu and Pokhara. We visited the monkey temple in Kathmandu and in Pokhara we did shopping.  All in all this was a life changing experience, adventure and eye opener to a different culture.  This would not have been possible without YET funding, so on behalf of myself and the whole team we want to thank you for all your funding and support for this amazing Expedition.

I was also lucky enough to take a head-cam with me on the trip and you can find a video I made of our kayaking and canyoning here (we were working too hard during the community project to film!): Adam’s expedition video on Facebook.