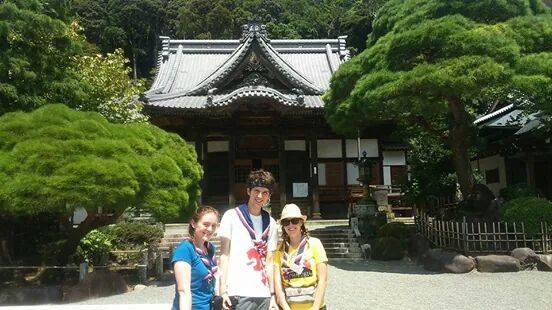 Zack Thompson of the Meyer Explorer Scouts Troop. Zack went to Japan for an Explorer Belt Expedition consisting of a 10 day trek aiming to gain a greater understanding of the landscape, people, and culture.

This expedition’s aim was to introduce us to a very alien culture. It did this through the challenge of financial management, being only given £50 to last my team of three for 10 days and over 100 miles! Because of this we will have to rely mainly on home hospitality and Japanese goodwill. Alongside this home hospitality we chose a major project that focussed on an area of Japanese culture and for us it was religion and its influence on Japanese culture.

Days 1- 4 were spent in Tokyo, mainly getting over jet lag, getting used to the extremely varied culture that is Japan and being completely shocked by the humidity! On Day 4 our route was shown to us for the first time and we were given a few hours to plan the route we would be taking over the next 10 days in an area of Japan that we had never been to or seen before. Our kit was quickly checked and we were given money for our meal that we would have on the first day. There were last tit bits of advice then we were sent to bed, with the knowledge that for the next 10 days we would be alone in the middle of Japan trying to cover 100 miles and staying at complete stranger’s homes.

Day 5 felt like the longest day. The coach drove for nearly 3 hours to reach our drop off point, although it felt like 20! We were then dropped off in the middle of a fishing port named Numazu and that was it. It was about 2:00pm and the humidity was unbelievable despite being by the sea, but we began our walk with earnest. After about 2 ½ hours we attempted to ask for directions. This resulted in us being escorted to a stranger’s house who (after many translation issues!) told us we couldn’t camp where we wanted to. Then, to our surprise, they then offered to house us for the night! Not content with giving us a roof over our head, they gave us showers, a meal and gifts! We got an early night, after holding their 800 year old Samurai swords, not entirely sure of what to make of the day.

Day 6 was our most difficult day despite some nice surprises. All I can say is that I am glad that your money was wisely invested into good walking shoes and good walking clothes because it was uphill, humid and very long as we had to cross the whole Izu peninsula in one day! Our friends from the day before met us though and took us to see a famous temple, Shuzenji, which was extremely beautiful and also allowed us to complete some of our major project. After which they gave us some food then let us descend Kameshi pass to meet our next Home Hospitality whom they had contacted for us. They said the walk would be an hour max, three hours later we finally reached the city of Ito, where we were quickly cleaned and fed at a traditional Japanese restaurant. More exhausted than ever we quickly collapsed into sleep, only to be woken up by fireworks at midnight, let off for reasons we didn’t really know.

The next day (7) we were woken by the news that we would soon be having a typhoon. And with that lovely news we quickly set off. The walk was uneventful but difficult with the shoulder pain starting to kick in. We arrived in the city of Atami pretty tired so we were extremely grateful of the fact that our previous hosts had contacted a café owner in Atami who arranged for somewhere for us to stay, with a complementary ice cream!  Day 8 was going to be, though, the day to remember! 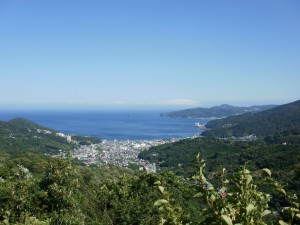 We made good progress on that day to start off with, arriving at Yugawara with good time. However my team mate then decided to have heatstroke, collapsing in the middle of the street, leaving me and my other team mate to deal with the ambulance arriving and the enquiring, non-English speaking, policeman. Eventually we arrived at the hospital where our friend was put on a drip for several hours whilst we contacted our host who arrived and picked us up and took us back to her place. There we hungrily ate the sushi put before us and climbed into bed planning what we were going to do in the typhoon.

On Day 9 our host, on advice from our leadership team, drove us to our next stop, Odawara, as my team mate still wasn’t in the best state to walk. As we had arrived early it gave us the chance to help our next hosts at their languages club, telling them what we had done so far (getting the usual reaction of, “You’re doing what?!”) and helping to teach English to the youngsters there. We then went back to their place and were given a chance to complete some of our minor projects, which we have to do alongside our major project to get our award. This included shopping with a family, meeting up with a local Scout group and even getting a beauty treatment or massage! Later that evening we made the family pancakes, which they had never tried before, and enjoyed some fried tofu. 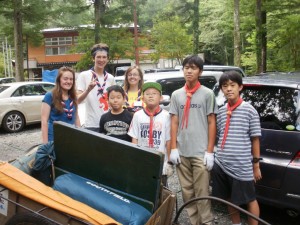 The next day the typhoon hit us and we sheltered with the family, who later took us to the amazing Daiyuzan temple in the mountains, made more dramatic by the typhoon and the mountain mist. There we learnt more about Buddhism in Japan and many of the rituals involved! We quickly retreated again when the typhoon picked up again and spent much of that day sheltering in their house.

The next day, after stopping by Odawara castle, we began again heading towards the city of Gotenba. The humidity was picking up again following the typhoon and the old aches of the previous days returned with a vengeance. We were greatly relieved that we knew there was  a home for us when we got to the city (although we did have to wait until 8:30 before we could get to them).  We quickly crashed into our beds and slept well that night.

We awoke on Day 12 to the sound of the returning rain. This set the trend for the rest of the day, endless rain in the shadow of Mount Fuji. Our coats got a full testing as we climbed upwards and then down (not up Fuji though!) with our only relief was a visit from the leaders, which gave us a slight morale boost. We descended into the town of Yamanakako where we quickly discovered that the town was a resort for Japanese holiday makers. Realising that very few Japanese people actually lived here and they were on the other side of a 5 mile wide lake, we quickly found a campsite cabin, the main form of holiday accommodation in the town, and cooked up the meal that we had bought for the first day of the expedition! 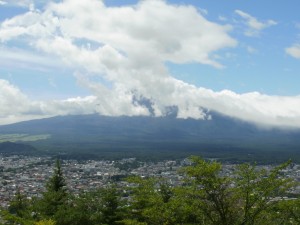 Day 13 began on high spirits, knowing that it was our penultimate day of the expedition, and the walk was nice and flat on our way to Fujiyoshida. However when we reached the town we realised that it was no town but a rather large city. After several hours looking for accommodation we were beginning to despair. Luckily one man offered to take us to his place but told us we had to wait until he finished work… in 3 hours! After waiting in a supermarket car park for 3 hours he turns up and tells us that his house is too small for us but his friend will take us to a pension back in Yamanakako. We phoned the leaders to tell them of the change and they were fine with it, so we bundled into his friend’s car that was the size of a mini… with our massive backpacks complete with tents and a stove! We returned to Yamanakako were we then had to wait a further hour until the pension’s owner arrived (who turned out to be a bodybuilder, who owned a quintessentially 1890s English boarding house!). We quickly paid and crashed into bed.

The final day was our easiest. A 45 minute walk to the finishing point was easy enough where we arrived so early that the leaders hadn’t arrived yet! Slowly, in dribs and drabs, all of the other teams arrived, tents were put up, stories were shared, and a leader made BBQ was eaten. We then got to watch the opening ceremony to the Japanese equivalent of what we had just done. The days leading to us leaving Japan were filled with visits to tourist attractions and a day free to roam around Tokyo. The generosity of the Japanese though meant that we left Japan tinged with sadness but filled with the most amazing memories that anyone could ever ask for! 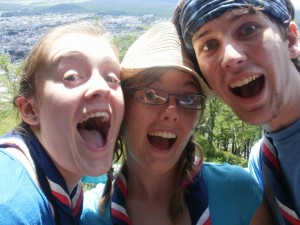 Overall the expedition was truly challenge for me but also truly opened my eyes to the variety and sheer beauty of Japanese culture and the supreme generosity of its people. Without your donation the expedition would not have been nearly as enjoyable and rewarding and for that I thank you profusely for giving me this opportunity to immerse myself into such a wonderful culture.

Thank you again and I hope you continue to support opportunities like this as it truly is an eye opening and rewarding experience.