After around 30 hours travel from Scotland I had finally arrived in Fiji, and what a wonderful arrival! 5 minutes after hopping off the plane we were serenaded down the arrival hall by two local bula singers; everyone, passengers and locals alike, was smiling. I met two other volunteers at the airport and we became friends quickly on the bus to the accommodation. Driving through the country really brought home how different Britain is from Fiji-houses made of corrugated iron, no visible amenities highlighted how fortunate I am to live where I do. I was then astounded at the happiness and welcoming personalities of the local people both at the airport and on the bus. This was a humbling experience for me as many people in Britain are unhappy with the way they live while the Fijians, even those who have nothing, are among some of the happiest people I have met. 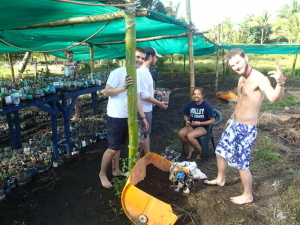 First day mucking in with the mangroves!

Upon arrival at the accommodation at around 11:00 we met the rest of the volunteers with whom I would share the next four weeks. Some had been there a few days, others a few months and all made us feel very welcome. We were given an induction into the project and shown the local village where we could get money, wash our clothes and buy food/souvenirs. A couple of hours later we had started afternoon activities which for that day was mangrove work. I learnt about mangroves and we worked to expand the mangrove nursery increasing the number of mangroves in the nursery. Each mangrove seed (propagule) was planted in plastic bottles, a recycling initiative set up by Projects Abroad involving local people. Each bottle was bought from villages for 3cent per bottle which provided benefits for the environment, the mangroves and the local village. The mangrove reforestation work that was carried out in the nursery was part of a larger scheme, managed by Projects Abroad, called Mangroves for Fiji which involved the local villages, school and tourist resorts with three smaller mangrove nurseries situated in the local area.

After a long journey, physical work and general tiredness I only managed to stay awake until 19:00 that night but went to bed thinking that the next month was going to be one of the best experiences of my life. I wasn’t wrong! 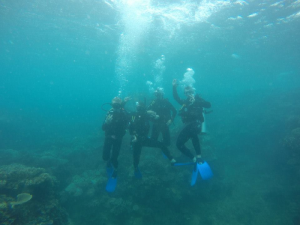 There was one important aspect that needed to be covered before anything else: diving! I received my PADI Open Water Diver qualification within three days of being in Fiji. As I had never dived before I was a bit apprehensive but even more excited to learn how to dive. Watching the introductory video to diving increased the nerves following a short section on the medical problems that can be obtained from diving however after the first confined dive all was forgotten. The first breath underwater was a tentative one however soon the coolness of being able to breathe underwater overrode the original feelings. This was then followed by the first open water dive in the ocean. The magic of being able to swim among the fish and sheer beauty of the coral reefs was awe-inspiring. As soon as I thought: ‘the only thing that would make this dive any better was if we saw a shark’, our instructor signaled that there was one ahead. A 1.2 metre White-Tip Reef Shark simply swam past us into the deep blue over the side of the reef; a surreal experience that I will never forget. I also hoped this wasn’t the only shark I’d see. 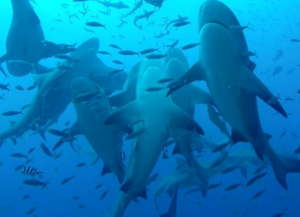 In the following weeks workshops were given about various aspects of the project including fish identification which, upon passing the test, allowed us to go on survey dives to known and unknown sites to monitor fish populations. On one survey dive alone we saw three separate hawksbill turtles and three more sharks, unbelievable! Another dive was to a new dive site and it was weird to think that this site had never been dived before. This also made me think of the amount of ocean that has not been discovered yet and the sheer size of that area is almost incomprehensible.

One of the best dives was the Shark Dive where I dived, without a cage, with 55 Bull Sharks being hand fed at the same time. It was incredible to see these giants of three metres (also the shark with the most human attacks per year) all swimming together. I realized that I wasn’t scared at all, I was just in awe at the gentleness of the sharks. There was no menace and there was even a social hierarchy as to which sharks went for the food first and it now (even more than before) seems mindless that we kill millions of these highly intelligent animals just for their fins.

An activity that was the most weather-dependent was tagging. I was lucky enough to be on the rota for a tagging trip that went ahead. This was very exciting! We arrived in the capital, Suva, and travelled to the University of the South Pacific. There we met two local boat captains and two scientists who were researching the distribution of juvenile Scalloped Hammerhead Sharks. The group piled onto a very small boat to brave the swell in the pitch dark to try and find Hammerheads. We visited two sites in total-at the first, we caught nothing. Spirits were low and the waves were high (gulp). We moved onto the second site. The moment we first saw a Hammerhead in the net the boat erupted. Excited shouts were followed by quick work which allowed the shark to be in and out of the water in less than 5 minutes. Two more were caught that night and we returned to the accommodation very late and very tired however we were too excited to go to sleep. What an amazing experience that will stay with me throughout my life. 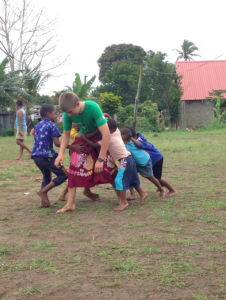 Playing rugby in the village

The most valuable experience for me was joining in with the local community. Every week Projects Abroad ran a swim club at the local beach where we taught local children how to swim. Fiji has one of the highest child mortality rates from drowning in the world and this made me think that swimming is one of the things I take for granted. Projects Abroad paid for all travel and other costs involved in the swim club as this was one of the main concerns of parents that wanted their children to join the swimming. This made me think that we are so lucky to have compulsory swimming lessons but also to have the money to pay for the skills necessary for survival such as swimming. This was a very humbling thought and I enjoyed seeing the progress that the kids made in such a short space of time. We also had community days where we watched firedancing and learnt a traditional Fijian dance. We also learnt how to make sunhats out of palm leaves which was great fun 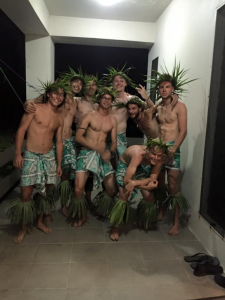 although challenging to get the technique right. For me the best community day was when we visited the local village of Naloa. We taught the school children about sharks and their importance to the ecosystem and their direct effects on livelihoods (mainly based on fishing) all around Fiji. We drank Kava (the local drink) and I feel this day was the closest I got to Fijian life. This really hit home the pettiness of our complaints as one of the only things the local Fijian children want is to go to school, whereas when at school, all we can think about is leaving and going home. We take so much for granted in Britain, such as clean water, food and education, to name a few, that visiting Naloa taught me so much about myself and my lifestyle that I will never look on Britain in the same way as I did before I left.

On the project, working days were from Sunday to Thursday, leaving the volunteers with Friday and Saturday to explore Fiji or to experience new things. During one of my weekends I went white-water rafting. It turned out to be the wrong time for white water and so it was just slow rafting but we rafted through some of the most breath-taking scenery in the Fijian Highlands. We had a tour around Namuamua village and then had a traditional lunch at a waterfall. This again highlighted for me the kindness of the Fijian people to welcome us into the village and to provide all they had for our lunch. During other weekends I received my PADI Advanced Open Water Diver qualification through Beqa Adventure Divers. 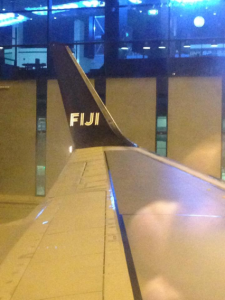 The time to leave Fiji arrived so suddenly. Four weeks passed in a flash and truthfully I didn’t want to leave. But all good things must come to an end. Having said my goodbyes to nearly everyone I had met while in Fiji I got on the bus to the airport. I reflected on my time in Fiji and thought about how my preconceptions and first impressions were not wrong but not entirely right. I thought that Fiji was poor and a Third World country however during my time there I realized that Fiji isn’t poor at all. It has the friendliest people in the world, its culture is astounding and the scenery speaks for itself. I feel like I have made a connection with Fiji and I wish to go back there at some point in the future.

I am very grateful for the contribution the Young Explorers Trust made to my trip to Fiji. I had one of the best experiences of my life and have met so many lovely people. It is great to know that there are organizations willing to support young people in this way. Thank you!