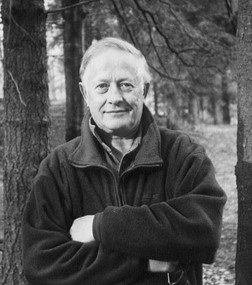 Tony Land, a founding member of the Young Explorers’ Trust, passed away just before Christmas.

“We shall not cease from Exploration” was, and remained always, Tony’s mantra. He held a lifetime belief in the value of youth expeditions to add to his personal love of exploration, local and abroad.

A donations page has been set up to help some of the charities that Tony & Pat Land have supported over many years. Donations in Tony’s memory can be made at anthonyland.muchloved.com

He was born in Hampton, S W London, in 1938 and layer moved to the Wirral where he attended Birkenhead School and gained his love of the outdoors. A major influence in his teenage years was his involvement in the development of the Hilbre Observatory, based on an island only accessible at low tide. This gave him the experience of scientific fieldwork, an important thread throughout his life. One of the club members was also a Brathay Expedition Group member. Through him, at 18, he joined the BEG Foula Expedition, where his role included leading the bird ringing project. He studied geography and geology at Southampton University and it was here that he met and later married Pat, his wife for 58 years.

Between university and starting a teaching career he spent a gap year in Eastern Finland before joining Uppingham School as a geography and geology teacher instilling in his students his own love of field work and the outdoors.  This led in the late 60’s to a spell at the Brathay Hall Trust in the Lake District. Here he had two roles as a field studies tutor and Secretary to the Brathay Expedition Group working for 50% field studies and 50% with BEG although in practice it became 100% for each!

For BEG he arranged for some 20 youth expeditions a year to a wide range of remote environments including Iceland & Tunisia, all with some serious fieldwork content. Foula, a remote island to the west of Shetland, remained an important part of the programme and BEG assessed many aspects of the island, its geology, geomorphology, ornithology and flora as well as the life of the people. They helped breathe new life into the local society. BEG’s interest in Foula was sustained for many years thereafter.

Tony then returned to Uppingham School becoming Head of Geography and Geology later becoming a Housemaster. He became closely involved in the Duke of Edinburgh’s Award using as a base his family retreat at Cockle House in a remote situation in the North Yorkshire Moors. This acted as a retreat for him and Pat and many of their friends. No mobile phone coverage, no TV just the sound of curlews and skylarks on the hillside above them.

In the late 60s and early 70s the concept of a society for youth expeditions was being mooted and Tony became an active member of the steering group. This led to the founding of the Young Explorers’ Trust in 1972. His first task was to set up an information service for the Trust. A Council member for some 50 years he was able to serve the YET in many diverse ways. As a member of the RGS Training and Surveying Committee  he played a leading part in the establishment of the Expedition Advisory Centre, a joint initiative with the Royal Geographical Society and the forerunner of Geography Outdoors, serving as its secretary in the first years of its establishment. Other tasks he undertook included Convener of the Screening Panel, checking plans of youth expeditions and awarding grants, as Treasurer and members’ secretary from 1999 to 2011. For nearly 50 years he was a kingpin in the YET, sometimes taking the lead in initiatives, always offering support to other developments.

Running through all this is his strongly felt belief that all aspects of expeditioning should be recorded. Whilst at Brathay he insisted on all expeditions producing full reports on their return. His first major publication was the Brathay inspired Expedition Handbook (1978) a complete guide to the planning, organisation and management of fieldwork for expeditions,. which later earned them an RGS Special Medal. He made valuable contributions to the work of YET in this way acting as Publications Officer for many years, including as a member of the committee that produced the substantial work “Safe and Responsible Expeditions” that was an authoritative text on how to organise and run an expedition. Tony was the ideal person to be Publications Officer as he had the considerable skill to take the words of others that they believed they had so carefully crafted into a good text and with a few adjustments edit them into an accurate meaningful and precise statement that better conveyed to the reader the intended meaning.

Over the years Tony was involved with so many aspects of expeditions, especially youth expeditions. He maintained an active leadership role in expeditions from Uppingham, Brathay and the Yorkshire Schools Exploration Society.  His colleagues always felt it was a privilege to be part of those instances and observe his quiet, good humour and hard work to the task in hand. His approach was gentle but authoritative. a very kind person who had sensible and clear objectives. He worked incredibly well in a team but, to him, meetings were not so much talking shops as action centres. His rather dry sense of humour and numerous anecdotes enlivened meetings, business or social. So, a good hospitable friend, a loyal committee man who was, unlike some, economical with the written word.   But most of all he was someone with whom it was a pleasure to walk, talk, work with, and explore.

Tony’s contribution to youth exploration is far reaching and his legacy will last more than a generation. He was an inspiration to many young explorers and a stalwart supporter of the value of expeditions, directly or through his YET/ Brathay/YSES roles. He will be sorely missed.