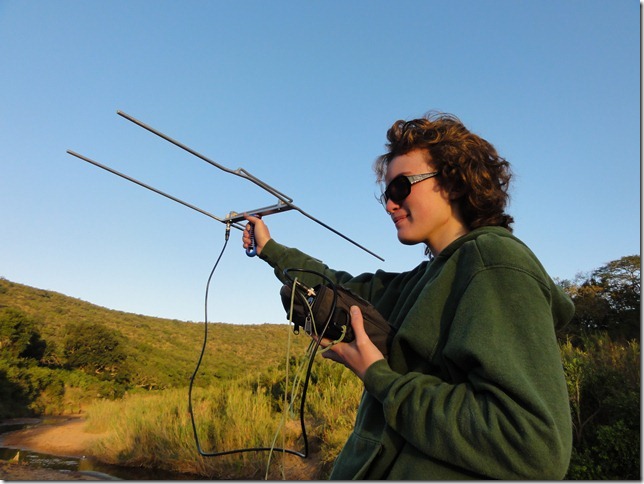 My name is Heather Jeffery, I am 18 years old and am currently on a gap year. In September I will be going to study biochemistry at Imperial College London. In my gap year I worked as a waitress to save up for a trip to South Africa where I did conservation work with animals. This consisted of 6 weeks volunteering on game reserves (Tembe Elephant Park, Hluhluwe-iMfolozi Park and Mkhuze Game Reserve) with Wildlife Act and a week volunteering on a shark cage diving boat (through Marine Dynamics) which involved working with tourists while also being part of the research going on at the same time.

On the reserves our main duty was to monitor the wild dogs which are an endangered species. There are only 350-450 of them left in South Africa and ¼ of that population are in the Hluhluwe-iMfolozi Park! We went out in the 4×4 twice every day and used telemetry to track them, enabled by the fact that some of the dogs have VHF collars on them. These collars are crucial pieces of equipment in tracking but only last a couple of years before they need replacing and you need at least one collar per pack of dogs. Preferably the alpha pair plus one other dog in each pack would be collared but they are very expensive so a lot of fundraising has to be done for this ideal situation to become reality. By volunteering some of the money I paid to go on the project goes into the conservation of these animals, e.g. towards collars. Tracking can also be done using tracks on the ground which was best at Tembe where there is soft sand everywhere so there are plenty of tracks to see. However, this is very time-consuming, is far from an exact science (e.g. exact age of a track is hard to predict and there are so many factors to consider) and is also a lot of hard work! At the other parks where the roads were mainly tar or dirt the tracks are less easy to spot or non-existent! It is so important to monitor them, especially on a park like Mkhuze where they have a lot of problems with snares in which the dogs accidently get caught (the poachers are generally aiming for antelope). If this is not picked up on quickly the poachers may kill the dog for food whereas if Wildlife Act get there first the dog can be saved. It was truly heartbreaking to see a couple of dogs with only three legs. They cope extremely well but they shouldn’t be put in this position! It is so hard to stop poachers from entering, but there is only the one pack of dogs at Mkhuze and in the last year it has decreased in size from 16 to 9 so if this pack is lost they will not be able to restart it as it will be deemed too dangerous for the dogs.

Wildlife Act is responsible for moving dogs between some of the reserves as often the reason for them trying to escape the confines of the reserve or for leaving their pack and wandering into trouble is while looking for other dogs of the opposite sex with which to form a new pack. It seems that life as a wild dog is never dull! Only the Alpha female is supposed to get pregnant but we have had two other females become pregnant in my time out there so now there is the issue of whether or not the new Alpha will let these other pups survive as she will want all pups to be hers. With species numbers low it is important that this does not happen but you can’t just explain this to a wild dog!

Wildlife Act are currently campaigning to get the name ‘wild dog’ changed to ‘painted dog’ as this will go some way in giving them a better reputation. Currently their bad reputation is partly due to the way they kill as they eat their prey alive. However although it sounds more gruesome it actually kills the animal quicker than if killed by say a lion.

At Mkhuze we also monitored cheetah. Did you know that cheetah’s hunting success rate is only about 10%? They may be the fastest land animal but they can only keep this up for a very short amount of time so have to get very close to their prey before ambushing it! Life is much harder for them than you first think!

Accommodation on the reserves was more civilised than I had expected and I even had a washing machine on two out of the three reserves, however, one of the ovens took three times as long to cook anything as a normal oven! There were only between 3 and 5 volunteers on each reserve so it really felt as if you were part of the team! As well as tracking the animals and writing notes about the sightings (location, time, date and behaviour seen) we also pumped up the vehicle tyres, cleaned the vehicle, fed an impala quarter to two wild dogs in the boma (an enclosure where new dogs go when first at the park as an introductory step) at Hluhluwe, painted a large food chute for the boma at Tembe, painted a kitchen floor in the new extension at Mkhuze, cleaned up the new camp in iMfolozi, inputted the data we collected into a database on the computer, tagged camera trap photos and created identity kits for some of the puppies and their parents at Hluhluwe. I really enjoyed all this work, especially making the ID kits as it really helped me to learn how to distinguish each dog and getting a left and right side photo of each dog (while making sure it is the same dog) is harder than it sounds!

I learnt a lot about all the animals plus you can’t beat the practical education of observing how they interact with their own and other species in the wild. Other animals I was lucky enough to see included leopard (a mother and two cubs in the dark but was still an amazing sighting!), an aardvark, black rhino, hyena and a steenbok (a small antelope which is fairly rare) plus the more ‘normal’ giraffe, zebra, lion, elephant, white rhino, buffalo, impala, nyala, kudu, monkeys (vervet, samango and baboons), wildebeest, warthog, vultures and countless birds! I cannot describe to you just how incredible the sense of being there is, surrounded by all the sounds of the bush, with the animals in their natural habitat! Mind blowing doesn’t quite cover it! A highlight was seeing the wild dogs take on a hyena right next to the vehicle! Thankfully no-one was injured, the dogs were just teasing him!

On the marine conservation week I stayed in a volunteer house and when the weather permitted we went out on the boat. This is a controversial area due to the increase in shark attacks but the boat does not actually feed the sharks, it just puts fish scents into the water to attract them. Also, the boat does not anchor near the beach where people may be put at risk. Every time we went out a record was kept of how many sharks we saw and whether they had any distinguishing features plus an estimate of their size. Volunteers were responsible for getting wetsuits ready and handing them out, looking after anyone who felt seasick, helping people in and out of the cage, cleaning the boat and anything else that needed doing!

This experience has been very rewarding and a great learning curve that I will never forget. I have met people from all corners of the world (nearly!): Holland, Australia, Germany, America, Canada, Ireland, France, Switzerland, England and, of course, South Africa, and of all ages! I have gained so much confidence without even realising it at the time and have never done as much cooking in my entire life as two of us ended up cooking for 8 people when neither of us normally cook much at home! It was my first time abroad on my own so I thought I would do it in style and have become so much more independent and more sure of myself while out there! I would definitely recommend this type of volunteer work to everyone out there and will certainly be doing more in the future!