It’s difficult to put into words the experience gained from the two weeks spent in the exotic land of Iceland; simply amazing is all I can conclude. It was such a rollercoaster of emotion, and being in Hornstrandir, one of the most remote areas in Iceland, combined with the fact that our team for the most part was cut off from technology created an emotional and truly exciting journey. A very large thank you must be given to the ‘Young Explorers Trust’ as without the Vivian Fuchs award, it would have been very difficult to achieve the funds to partake in this very unique experience, in addition to BPE (Bull Precision Expeditions) who organised the majority of trip. The purpose of this expedition was to gather Arctic fox data in Horntrandir nature reserve, in addition to developing our teamwork and leadership skills by enduring the tough hikes in which Iceland had to offer.

Our journey began on the 15th of July from Luton Airport to the graceful city of Reykjavik. We spent one night here, in which we explored Iceland’s capital for a place to buy food. It was here we made a great discovery, Bonus! (The Icelandic version of Aldi). After buying cheap tax free food, our team relaxed in Reykjavik’s local swimming pool. The next morning at 6am we began our ascent into the very scenic town of Isafjordur. The most effect method of travel to Isafjordur was by domestic plane, as driving by car or coach would not only be expensive, but also extremely time consuming. This in itself was very exciting as we were given the pleasure of getting a bird’s eye view of the countries beautiful landscape, not to mention the president of Iceland sitting at the front of our plane. That’s right; he was actually on the same flight as our team. I guess technically I can say I flew on Iceland’s version of Air Force One.

Iceland is a very a small country
Mitch, head of the Arctic Fox Centre when told about our presence with the president.

The first act of our journey was visiting the Arctic fox centre. We were given a brief lecture on the native Arctic fox, which included the two types (Blue and White Morph), their diet, their living patterns etc. All data on Arctic foxes we collected, such as their excrement and the coordinates of the location of which it was found, as well as any sightings of foxes (of which there were lots!) in Hornstrandir was sent back to here at the end of the trip. 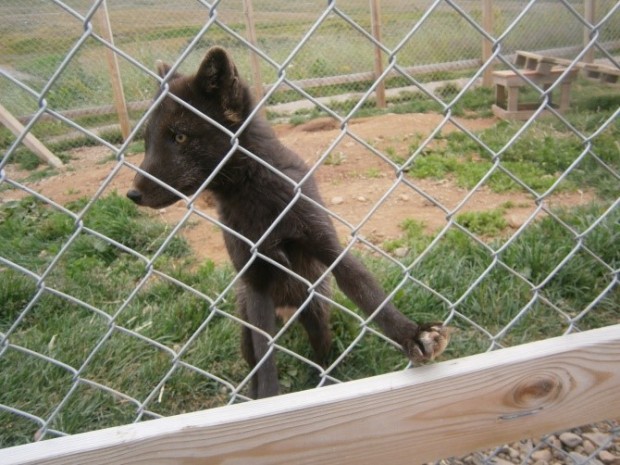 After which we camped in Dvergasteinn valley and enjoyed a short day hike up to a nearby waterfall. This was but our first taste of Iceland’s countryside. On the fifth day, we began our 7 day trek into Hornstrandir. The first leg of the trek started in Grunnavik after being transported via boat. 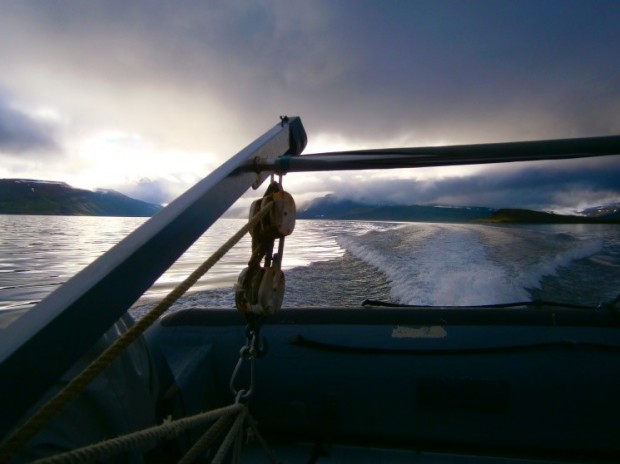 Although trekking all the way to the fjord ‘Leirufjordur’ was a long and exhausting escapade, it did however reveal the true natural beauty of Iceland. Remarkable valleys and scenic waterfalls were surrounding us everywhere we walked, as well as the native wildlife making frequent appearances. More fantastically, a family of seals bathing along the shore of Hralnfjordur, in addition to our first spotting of Arctic fox excrement.

The first real test of our resolve came when it was time to cross the fjord ‘Leirufjordur’ at low tide. However I made the ultimate mistake in crossing in my walking boots instead of my river crossing shoes. This unfortunately meant that my boots were saturated for the rest of the main journey. The river was cold but not freezing. The most difficult aspect of this objective was getting staying motivated throughout, as we couldn’t really stop because the longer we stayed, the colder we were getting. Then began the equally lengthy journey to our base camp, which did unfortunately involve one of our two maps being dropped from a steep cliff, up stream of Hralnfjordur, in which we spent three nights. The first of which was very much a rest day from the emotional rollercoaster of the last two days. Therefore the highlight of this day was collecting muscle shells along the shore at low tide which we cooked and ate with our two new friends who arrived to camp, Swiss hiker David and French photographer Didier Guy. The other highlight of the day was going back with three other friends and finding the map! Thankfully it wasn’t washed out by the tide, which was a huge morale booster. 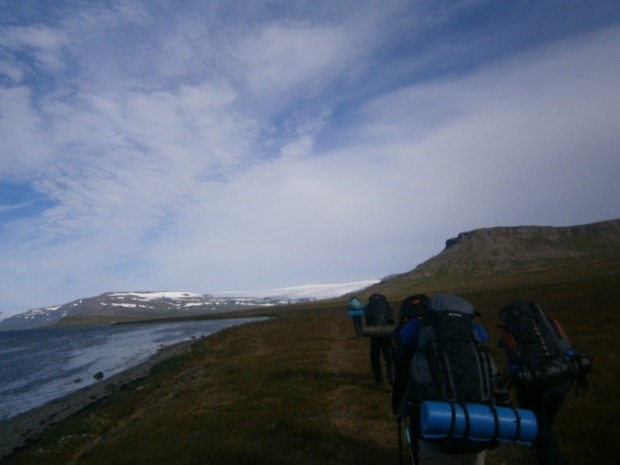 The very next day we began our ascent to the glacier Drangajökull. This was no doubt the most difficult hike of the journey, as after about halfway of the journey, the walking trail disappeared and the ground was getting much steeper. Climbing up towards the summit was daunting, especially considering the ground was very loose; one misstep and it would be a very unpleasant fall. 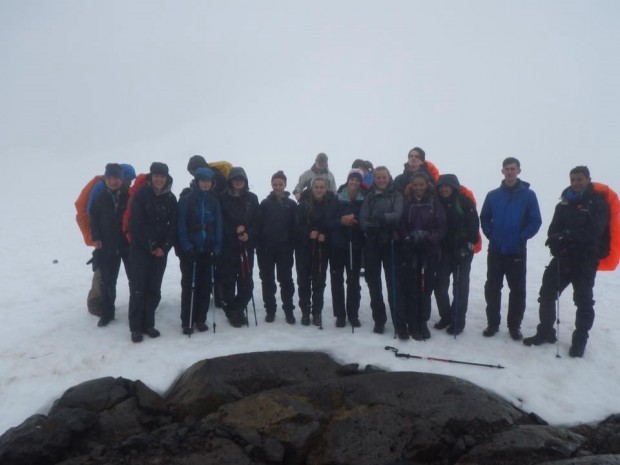 After reaching the top exhausted we finally got to the glacier

The very misty atmosphere meant that we couldn’t quite enjoy the view, but the shear spectacle of finally reaching Drangajökull was magical in and of itself. The third day our team split up to explore the local area and search for more Arctic fox data. This was a much more relaxed day compared to the previous.

After the fourth day we began the long walk back to ‘Leirufjordur’, where we camped until 4am for low tide. This crossing was twice as brutal as the first time. This is because the temperature was far colder than the previous, mixed with the fact that it was also raining all throughout the night. In my terrible river crossing shoes, we trudged through the fjord freezing cold. Luckily about halfway through my feet were so cold they gone numb; therefore the pain went away temporarily. After that ordeal we plodded onward towards Grunnavik, with our soaking wet feet. Looking back on the 7 days in Hornstrandir, I can say it was certainly an exciting and memorable experience, but the joy I felt when we got to our camp in Grunnavik and discovered that there was a working toilet was immense. The very next morning we were on our boat to Isafjordur with much kinder weather to appreciate the view (still no whales unfortunately).

Our last remaining days were spent travelling via transport, sending back our Arctic fox data and relaxing. The highlight of which was the Golden Circle (Thingvellir National Park, the Geysir geothermal area and Gullfoss waterfall) and the Blue Lagoon. Gulfoss and the Blue Lagoon were indeed my favourite moments of our rest and relaxation time, but I can’t help but think that the best and most memorable parts of the expedition were in Hornstrandir, in the very heart of Iceland’s natural beauty, suffering together as a group. 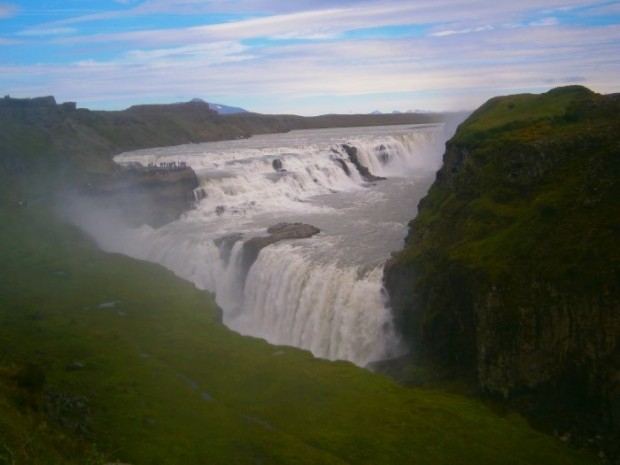 Overall the Iceland expedition has given me one of the most exciting experiences of my life so far, from climbing the glacier, to gathering real scientific data. The locals were so friendly and I struggled think of anywhere else as unique as Iceland both culturally and geologically. I would implore any individual to visit Iceland as it is one of earth’s true natural gems as I feel extremely privileged to have embarked on such an eye opening journey.