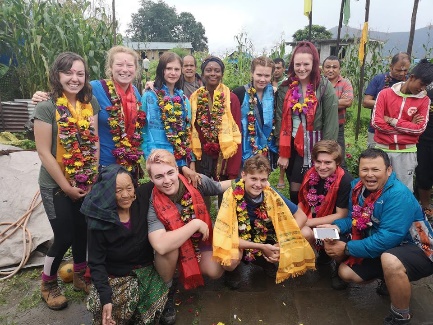 As a group of 9 young people and 2 leaders, we began our project by travelling to Kathmandu, Nepal, by plane, and spending a couple of days in the city to adjust to the culture, climate and new lifestyle. We visited the Monkey Temple to learn about the significance of religion in Nepalese culture and the specific history of this location and, before our trek, we were also introduced to our guide, who became an integral and valuable member of our team.

Following this, we took a short journey out of the city to our first campsite in the Gorkha district, where we prepared for our seven-day trek through the Lower Manaslu mountain ranges. Our trek was tough, and involved lots of both uphill and downhill hiking, through challenging natural terrain, along pathways that had been created simply through years of use. However, it was undeniably rewarding as we were able to experience the unique culture and breath-taking landscapes of Nepal first-hand. We stopped at a different camp site each night, where we rested up for the next day, relaxed with our team and got to know our Sherpas and guides.

At the end of our week of trekking, which tested our resilience, physical abilities and team-working skills, we reached our destination: Barpak, a remote village with an altitude of 1,900 m. Here, we volunteered within the local community, meeting a variety of individuals and organised groups who live in, and support, the village. Organisations which benefitted from our visit include the school, to which we donated educational materials and sums of money, and where we visited classrooms to meet the young people and learn about their personal and school lives; the Mother’s Group, to whom we donated bags of clothes and also sums of money to be distributed amongst the village; and the village library which has only recently opened and who received a large donation of children’s reading books. These contributions will hopefully help to enrich the lives of many of Barpak’s young people and to aid the quality of the education which they receive via new materials and teaching resources. We also spent a lot of time with the young people in the village, reading, teaching about differences in our cultures and enjoying each other’s company.

In addition, Barpak was one of the casualties of the devastating Nepalese earthquake in 2015, and much of the village was destroyed. Despite the speed with which buildings such as the school were re-erected, these structures are still only temporary and with the help of our donations and continued support, it is hoped that a new school building can soon be erected to provide the young people with an appropriate school environment.

After our welcoming stay in the village, and having received a warm send off, we trekked back through the mountain ranges for three days until we reached the Trishuli River and from here we water rafted for two days and continued our journey back to Kathmandu. To finish off our stay in Nepal, we spent a further day in the city before travelling home on September 2nd.

I chose to take part in the Nepal Adventure because the opportunity was unlike anything I’ve ever done before. Travelling to Nepal, trekking through the mountains and spending time in such a welcoming village with young and old people alike, really opened my eyes to the differences in culture across the world and reminded me that many of the things I take for granted in my life (even something as simple as a hot shower or a classroom with four walls) are privileges for people in other parts of the world. Returning home, I feel as though I have a new perspective on the way I want to live my life; appreciating small luxuries more noticeably and making the most of being able to govern my own future in the way I want to experience it.

But overall, I have left Nepal with an extremely positive impression of their country. Everyone that we met or encountered on our travels was extremely welcoming and often went out of their way to make us feel comfortable. For me, this particularly stood out as I feel that quite often, in our own country, we are somewhat hostile to visitors and tourists, however, my group and I were frequently treated like royalty and this was very humbling. I can positively say that it is one of the things that has encouraged me to continue to be more accepting in the future.