Thomas Brittlebank in Laos and Vietnam 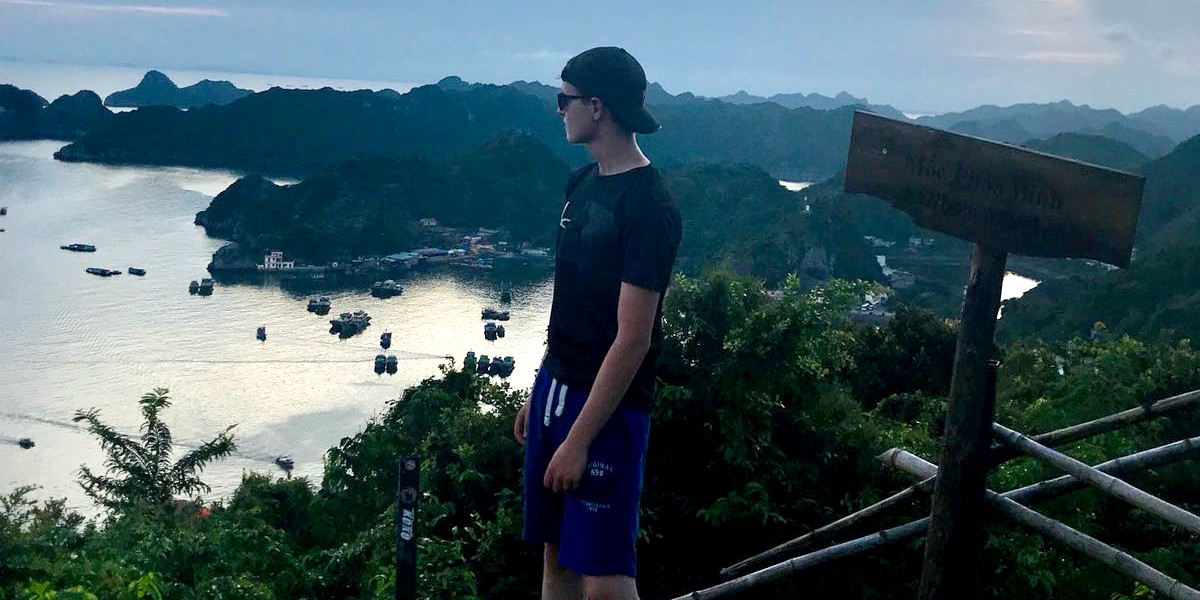 On the 10th of July, 19 of us arrived at Manchester Airport with around 100 litres of rucksack space filled with the next months’ worth of clothes and equipment. We travelled from Manchester to Dubai, Dubai to Bangkok and finally Bangkok to Luang Prabang. We had a day or two to acclimatise and sort out accommodation etc. in Luang Prabang but we also visited places like Mount Phousi where we walked up a hill to the temple perched on top.

Our first of two treks was in a place called Luang Nam Tha, more specifically the Nam Ha national park. It was a three day trek that many consisted of walking up one side of a jungle covered mountain and sliding down the other side. Although it wasn’t as far to walk each day as the second trek we did, it was in 30 degree heat, with 70%+ humidity all day whilst stepping over and under branches and vines. Coincidentally, during this trek was the first time we experienced Laos’ monsoon rain. Despite all of that, personally that was one of my favourite parts of the expedition. Although I don’t speak for the whole team when I say that.

After we finished our trekking we returned to Luang Prabang. Whilst we were there we went to the Kuang Si water falls where there were large natural pools of water that we could swim in and we also visited a bear sanctuary.

The community engagement phase was a week long. We had to travel there by boat due to there not being any substantial roads to the village. During this week we helped renovate an old school building in time for when the children came back from their holidays and in pairs we had to teach a class of the locals for a day. Luckily myself and my partner were put with the youngest class which turned out to be more like a day of games than teaching, the only trouble was they didn’t speak a word of English and the extent of my local vocabulary in their language was ‘hello’ ‘goodbye’ and ‘thank you’. Some of the team had to teach a class of 15-18 year olds who had quadratics and geometric sequences on the class room walls so I didn’t know what they taught them! When the week came to an end, on the last night, we were presented with white silk that the elders of the village tied around our wrists and gave us blessings. Later that night there was a party and a group of the locals performed a dance in front of us all, little did we know they expected our team to present them with a dance in return. We left the village the next day after treating them to the music and dance moves of the Macarena!

It was now time to cross the border from Laos to Vietnam. The first place we stayed in Vietnam was a place called Sapa. This is where we did our second trek which was five days instead of three and each day was around 10 – 15 km of walking. We walked down into a valley through rice terraces all in view of Mount Fansipan. Next we travelled to the capital, Hanoi, on a night train to leave the next morning to Cat Ba island. From there we went to Halong Bay where we spent a full day kayaking around the rock formations, through small caves and exploring hidden lagoons. For most of us this was the highlight of the month. Our last day was back in Hanoi which we spent most of our time in the markets. They were everywhere and full of fake designer brands, this is the place where I brought my ‘genuine’ Rolex for £10. That night we crammed all our stuff back into our rucksacks and flew from Hanoi to Dubai and finally Dubai back home to Manchester airport.

It was a lot of work beforehand but it was definitely worth it so thank you to everybody who enabled me to experience one of the best times of my life.