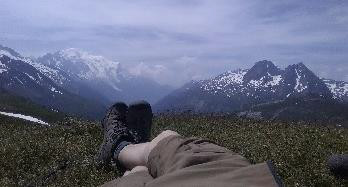 Over June and July 2018 the three-man team completed the 168km trek around Western Europe’s highest peak, achieving their key objectives:

On their final day in Chamonix Joe and Oli hired a guide to climb the Petite Aiguille Verte as an introduction to alpine mountaineering. This is a mixed snow, rock and ice route which passes over the Argentière Glacier from the Grand Montets lift and ascends the NW ridge to the summit, 3512m.

This was an awesome experience sponsored by the Jeremy Wilson Charitable Trust and has sparked a keen interest in alpine mountaineering. Joe has since taken part in a mountaineering expedition to Switzerland with the Cadet Centre for Adventurous Training.

Throughout the expedition research was conducted into fitness and team cohesion, and the effects of leadership style and daily events on this. Clearly a study population of 3 is unlikely to produce bombproof, statistically-significant results! However, it did provide food for thought: on a personal level, simply thinking about the factors that affect morale; situations to anticipate and avoid; and ‘leader’s tricks’ to mitigate bad days has proved invaluable.

Fitness improved in general over the expedition however this varied: core strength (situps) continuously increased; leg strength (standing jump) decreased hugely and upper-body strength (pressups) changed in cycles but overall increased. The positive impact of rest was significant and noticed in all cases.

Team cohesion was closely linked to the effectiveness of the team, following Tuckman’s Team and Group Development Model, with leadership style having a negligible impact on this. It did, however, effect individuals’ perceptions of their contribution towards the team’s success, with detailed command being the better style for this. The most notable dips in team cohesion were missing Bivouac Gervessuti and the group splitting, suggesting that individual events had a larger effect than leadership style on cohesion.

The expedition received grant support from a number of organisations and we are immensely grateful for all of it as it not only allowed the expedition to go ahead but, more importantly, has enthused us into planning future expeditions which previously would have seemed wildly out of reach. We hope that we are able to use this support again in order to execute expeditions that take the ‘spirit of adventure’ to a whole new level. We are already planning an overseas expedition for Summer 2019.