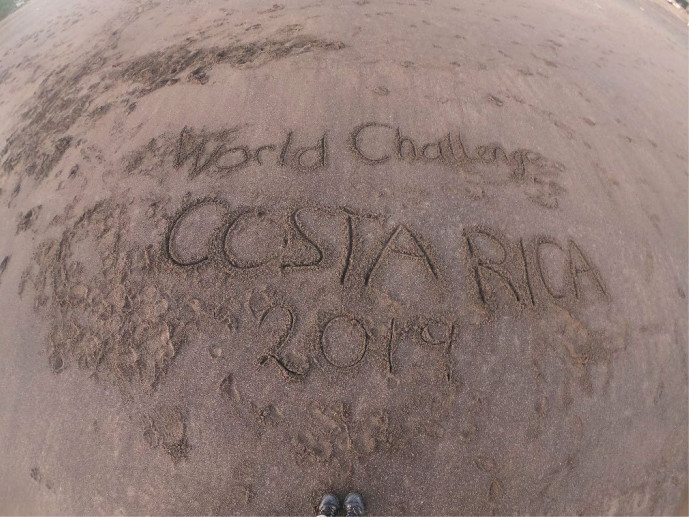 I have just returned from the adventure of a lifetime! Three weeks in Costa Rica, accompanied by representatives from the “World Challenge” organisation and a group of students from my school. And it did have its challenges, the first of which was signing up to the trip, having just broken both of my elbows in a trampolining accident.

Embarking on a “World Challenge” expedition, a rainforest trekking adventure holiday with a conservation and community project is quite daunting, especially after an accident like mine. But I was determined, and thank goodness I was.

The “World Challenge” organisation was set up by a young army captain who took a team of soldiers on a training mission to the Hindu Kush mountain range in Pakistan in 1985. He quickly realised that the
personal development and teamwork skills learnt would shape the lives of those individuals for years to come. “World Challenge” was later born from this experience in 1988, “building the life skills young people need to live a life of courage, kindness and adventure”.

The expedition’s original destination was Nicaragua, but it soon became very clear that this was not a safe place to be. The expedition was relocated to Costa Rica, a Central American country with coastlines on both the Pacific Ocean and the Caribbean Sea. Its capital is San José, which was our entry point to the country. It is probably best known for its beaches, volcanoes and biodiversity. Roughly a quarter of the country is still protected jungle, full of amazing wildlife.

Unfortunately I did not have a regular job, so I raised the money in a number of ways, from running refreshment stalls and raffles at school parent evenings & functions, sponsored events (such as my Silver Duke of Edinburgh hike), making & selling products at Christmas fairs, running a Beetle Drive, to name but a few. It was hard work but very rewarding. I was also lucky enough to receive grants and bursaries from a number of organisations including: The Young Explorers’ Trust, Catholic Women’s League, Knights of St Columba, The Chislehurst Rotary Club and The Lions International.

Raising the funds was a slow process and took the whole 18 months, but I did it and reached my target just in the nick of time. I raised the last couple of hundred pounds with a sponsored haircut, and I donated my hair to the Little Princess Trust (a charity for children who have lost their own hair through cancer). A very satisfying milestone. Raising the money was part of the ‘journey’, and I learnt a lot from this process, from how to make money from seemingly nothing, to how to communicate with people. I met a lot of interesting people and I was touched at how many people were interested in my trip and wanted to support me personally. This made me more determined.

Before I knew it, the trip was looming. Endless preparations, getting fit, accumulating kit and having my injections were all complete. It was time to travel!

Two teams travelled together from our school. We met at school for a Build-Up Day of preparation and final kit checks. We headed off to Heathrow for the long flight to Costa Rica. We flew to Mexico City, before changing planes for San José. It was a long flight (approx. 13 hours). We separated on arrival at San José and had completely different itineraries. We did not meet up again until we met back at the airport to return home. Our team comprised 14 students (aged 15-18 years), 2 teachers and one “World Challenge” leader.

Our trip was divided into three sections: trekking, the project and the rest & relaxation and other activities.

During the first phase we undertook 3 short treks as part of our acclimatisation process. The change of climate took a bit of adjustment. We also undertook a 4-day trek through the rainforest, from Santa Maria to Londres, near the west coast. This was very challenging, mentally and physically, but we worked together as a team and supported each other through the ordeal. Challenges included carrying full pack loads for the duration, long distances and long hours walking, trying to cope with the humidity, the continual ascent then descent, which really affected our leg muscles. The paths were slippery and very narrow in places, with sheer drops on one side. This was quite scary initially, especially as we were tired, but as we became more confident and sure-footed it became ‘normal’. A couple of make-shift bamboo poles helped with stability. We camped in cabins along the way, some of which were in a poor state of repair, with a missing roof or walls! Although I have completed my Silver Duke of Edinburgh this trek was unlike anything I had experienced before.

During our hike, on the third day, we stopped at a farm owned by two of our three guides. The farm was called Ranchos Tinamu. Here we helped out by milking a cow and washing the pigs. We learnt how sugar cane is processed and they took us to a beautiful waterfall to swim.

The second phase was the project. This was to support the community and help out at the Ostional Wildlife Refuge, run by Don Gilberto and Maria Socorro. This is located on the west coast on the Nicoya Peninsula. They set up the refuge in 1983 so the nesting turtles could lay eggs and hatch the babies in peace without poachers. We were surprised to find out that the local community are allowed to collect and sell 1% of the total eggs laid on the beach, providing a monthly income for the community. This is strictly controlled and occurs during the first 36 hours of the “arribadas” (turtle arrival) each month. The theory behind this is that this number of eggs would be destroyed by other turtles coming up the beach in order to lay their eggs. Whilst helping out at the Wildlife Reserve we stayed in a cabin behind Don Gilberto & Maria’s home.

Our involvement in the conservation and community project involved turtle watching, beach cleaning, painting a mural and playing with the local children. We really felt that we had helped in conserving this amazing nesting ground.

We also did one day of tree planting before starting our 4-day trek in Santa Maria. This was to try to offset our flight’s carbon footprint.

The last phase was rest and relaxation. This allowed us the opportunity to experience white water rafting on Rio Naranjo, 6 miles of white water rapids. An exhilarating experience and a great way to view the fantastic scenery. We also visited the town of Quepos for a spot of shopping and to tried to talk to the locals in our hurriedly learnt Spanish!

During our stay in Costa Rica we were lucky enough to see quite a range of wildlife including: iguanas, geckos, crocodiles, howler & white faced monkeys, scorpions, tarantulas, a racoon, a sloth, turtles and toucans, all in their natural habitats.

After three weeks in Costa Rica we had mixed feelings about leaving. Glad to be going home to see family and friends, but sad to leave the amazing surroundings and experiences that we had encountered whilst we were there.

I feel very lucky to have been one of the 8,000 students who get the opportunity to benefit from the “World Challenge” experience each year, whilst giving back to the local environment and community, and making a real difference to the lives of others, something that does not come along very often.

I am also very grateful to all those who have helped and supported me through my ‘journey’ from signing up, fundraising and preparing to embark. I also have to thank all those who accompanied me on my expedition, students, teachers and leaders, without whom I would not have succeeded and benefited from the experience to the same degree. It is truly a team experience, although it was full of personal challenges and achievements. Having said that, I would definitely do it all again and recommend it to others.