Report by Catriona Collie
Recipient of the David Hollier Award

I would like to thank ‘The Young Explorer’s Trust’ for the generous contribution it made to help make my trip to Iceland in the summer of 2015 possibly. This funding, along with money my team and I raised through personal fundraising and other grants received, enabled us to successfully complete our seventeen-day long trip. The funding we received contributed towards various necessary training courses and our living costs in Iceland. 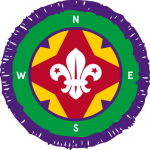 The purpose of our trip to Iceland was for each Explorer to complete their Explorer Belt Award – which we all did! The Explorer Belt Award requires participants to undertake a ten-day expedition in a foreign country (which we completed primarily on foot), causing them to develop an understanding of the country, its culture and way of life through interacting with local people and completing minor and major projects throughout the expedition.

Essentially, the trip to Iceland was split into three parts – we began by acclimatising as one large group in Reykjavik, then completed our ten-day expedition as two separate groups, and finally spent some time all together doing some sightseeing and recreational activities.

Our trip began with a flight from Edinburgh to Reykjavik on the 2nd of July last year. We spent three nights at Reykjavik campsite, and during this time we completed some minor tasks, such as carrying out food shops within budget constraints and purchasing bus tickets, to ensure that we were ready to begin our expeditions, and also saw some of the sights of Reykjavik, including the Sólfar (sun voyager) sculpture, shown below.

One of the best parts of our time in Reykjavik (and in Iceland generally) was the geothermal swimming pools. Pictured above (not my photo – cameras are banned!) is Laugardalslaug, the city’s largest pool, which was right beside the campsite we stayed at. The outdoor pool had geothermal hot tubs that increased from 38° to 42° – the latter made you feel like a lobster in a pan of boiling water – alongside a 50m pool, a steam room and a waterslide that we made full use of!

Before leaving Reykjavik, our leaders gave us a list of the ten minor projects we were to aim to complete during our expedition. Along with our major project, which involved comparing and contrasting renewable energy sources in Scotland and Iceland, these minor projects provided us with a multitude of opportunities to interact and learn more about local people in Iceland. Some examples of the minor projects we completed include teaching some Icelanders a ceilidh dance, providing help in a workplace and meeting a local celebrity, dignitary or official. Over the course of our ten-day expedition we successfully taught a Scout group in Selfoss how to (try to) dance the Strip the Willow, helped some volunteers from a group called SEEDS to weed an area of the geothermal park in Hveragerði and met a local minister and some members of Heimaey police force, along with many other things! 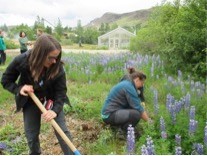 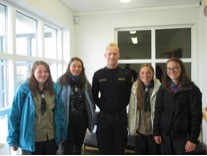 Our route followed the southern part of Route 1, a ring road that runs around the island and connects most of the inhabited parts of the country. We began in Reykjavik, making our way west by foot (and the occasional bus) with a detour by ferry to the island of Heimaey off the south coast, and concluding in Skógar, around 150km from our start point. 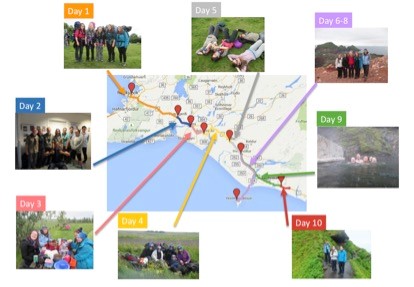 Along the way we completed our minor projects that I have detailed already, and investigated renewable energy in Iceland. During our planning before leaving for Iceland we had done research into renewable energy sources in Scotland, visiting sites such as the Harlaw Hydro Scheme in Balerno, Whitelee Wind Farm and Cruachan Hydroelectric Power Station. This research taught us a lot about both small scale and larger renewable energy initiatives in the UK, and allowed us to effectively compare the extent of these sites with similar ones in Iceland, such as Hellisheiði Power Station (pictured), which we visited on the first day of our expedition. In general, it is clear that Iceland utilises the renewable energy sources available far more efficiently than the UK, which is reflected in their energy prices in comparison to other countries. Another huge benefit of the abundance of geothermal energy in the country is the extensive and hugely affordable availability of outdoor, heated swimming pools! 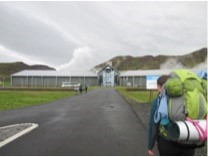 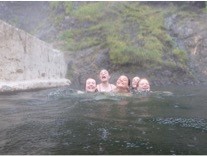 In every small town that we visited along our route there was the opportunity to visit an outdoor, geothermally heated pool, which we took full advantage of as they were great fun, warm and gave us an opportunity to shower! The best pool of all though was the oldest existing pool in Iceland – Seljavallalaug, a 25m outdoor pool in a valley below Eyjafjallajökull. Since that night we were camping without facilities and the weather was damp and cold, allowing for us to do nothing but hide inside our tents, we instead spent around four hours in the warm pool in the valley. The views were brilliant, and it just felt incredible to be swimming about in the warm water as rain was falling. We even ate our dinner in the pool! 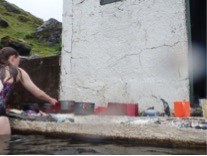 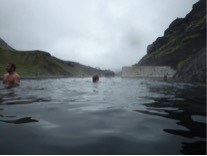 After completing our expedition, the trip concluded with a tour of the Golden Circle which allowed us to see some more of the sights of Iceland, including the Geysir geothermal area, Gullfoss waterfall (below) and Þingvellir National Park. We all hugely enjoyed this trip and embraced the opportunity to have a seat in a bus for a few hours! After seeing the Golden Circle, we spent a few days at a Scout centre at the edge of a lake called Úlfljótsvatn (below), where we spent plenty time relaxing along with doing activities such as canoeing and cycling. 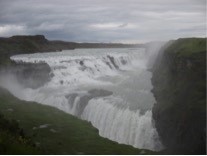 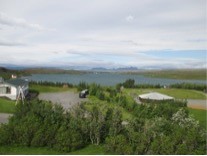 We finally returned home on the 19th of July. We were all incredibly sad to see the end of our trip to Iceland, as I’m sure the rest of the group would agree that it was one of the best few weeks of my life. I wouldn’t hesitate to undertake another trip of a similar nature, no matter how tough, physically and emotionally, it became occasionally. I am so grateful to have had this opportunity, so thank you again for the contribution that you made, which helped to make all of this possible!