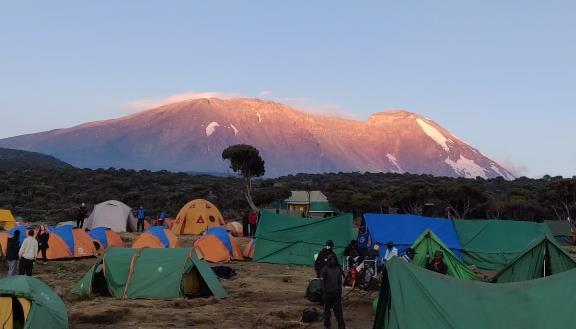 Around 9.15am on Tuesday 10 September I stood at Uhuru Peak, the very highest point in Africa. It is also known as the summit of Mount Kilimanjaro, the tallest free standing mountain in the world, some 5895 metres (19,341 feet) above mean sea level. I had spent a year planning for this moment and with the summit in sight I had nearly given up, not because of my arthritis, but through the effects of altitude sickness.

It had all started when I arrived at the University of Birmingham (September 2018) and during “freshers week” I signed up for the Kilimamjaro expedition. I had a year in which to complete my training, save for the trip and buy all the necessary equipment. I was extremely fortunate and grateful in that I received the very generous Everest Award from the Young Explorers’ Trust and that financial contribution helped enormously. One year later, on 4 September 2019, I travelled to Heathrow and met up with the rest of the team who were taking part in this expedition. There were 24 of us (all students) and we took the overnight flight to Nairobi, landing after 8 and a half hours in the air. After clearing customs we spent another 8 hours travelling by bus to our accommodation at Moshi in Tanzania.

Early next morning we travelled the relatively short distance to Machame village and then on to the Machame Gate, our entrance to the national park. By the middle of the day we had met with our porters, had completed the obligatory registration documents and were ready to commence the ascent. The Machame gate is situated 1,810 metres (5,938 feet) above sea level so there were only “only” another 4,085 metres (13,402 feet) to the summit.

Most of the afternoon was spent climbing through lush cloud forest with noisy birds and curious monkeys observing our progress. The route became steeper and the forest less dense as the day progressed and we reached Machame camp site around 6pm. Having got the tents and bedding sorted out we all got together for a very welcome meal. Not only did our porters carry the bulky equipment but they carried our food and cooked our meals as well. We had trekked about 11km (almost 7 miles) and had reached an altitude of 2,835 metres (9,301 feet). With the increase in altitude it was beginning to feel uncomfortably cool and my hands would remain cold (despite gloves) for the rest of the trek.

The next day we left camp around 8.30am and climbed a steep ridge that eventually led to the Shira plateau. The terrain changed from forest to grassy moorland and it stretched for some considerable distance. Unfortunately some members of the team were experiencing the onset of altitude sickness and began to lag behind. Fortunately I was not affected so stayed with them and offered help and encouragement. We arrived at Shira camp around 3pm having reached an altitude of 3,840 metres (12,598 feet). We spent the rest of the day acclimatising, getting to know each other and getting to know our friendly and helpful porters. A real sense of camaraderie was developing and this would be very important as we climbed ever higher up the mountain. A magnificent sunset brought the day to an end.

Our third day was planned as an exercise in controlling the acclimatisation process. We would climb to the base of the lava tower (a volcanic plug) at an altitude of approximately 4,600 metres (15,092 feet) and then descend to the Barranco camp at the lower altitude of 3,900 metres (12,795 feet). We left the Shira campsite at 8.15am and climbed into the highland desert zone. We navigated around rocks that littered the landscape, debris from volcanic eruptions in the past. Luckily for us Kilimanjaro has been inactive for the last 150,000 years! Some of the rock formations have evolved into strange and unusual shapes and were fascinating to look at. As we approached the lava tower it was becoming increasingly cold and windy but I was more concerned by the onset of a severe headache.

Although the headache overshadowed my enjoyment of the lava tower it is without doubt a spectacular sight, rising about 65 metres (213 feet) above the desert floor. I was unable to enjoy the snack set out by our porters but did drink a reasonable quantity of very cold water. About an hour later, and as we began our steep descent into the Barranco valley, I was feeling much better. After 9 hours on the go we arrived at our camp site, not much higher up Kilimanjaro than we had been at the start of the day.

Emerging from my tent on day four I could see the intimidating Barranco Wall towering above the camp site. The wall is 257 metres high (843 feet) and appears to be impassable without some degree of mountaineering skill. In fact there is a route known to the porters that zig zags its way to the top. It is definitely a scramble and it becomes very narrow in places. For those who were a bit nervous there was always a porter ahead and behind, ready to help. It took about two hours for us all to reach the top and I think that everybody felt the satisfaction and exhilaration of having completed the climb. I know that I did. The view was spectacular and the summit of Kilimanjaro could be seen. We proceeded down into the very rocky and misty Karanga Valley and then climbed up to the Barafu camp some 4,660 metres (15,289 feet) above sea level. We had been on the go for 11 demanding hours. Despite my headache on day three I had none of the symptoms associated with altitude sickness on day four. I was able to offer help and support to friends who were struggling.

As a precaution, we were all checked by the medics and two members of the team were found to have low blood oxygen levels and were advised to return down the mountain. I felt desperately disappointed for them. I went to bed early because we were scheduled to start the final ascent later that night. I was packed and ready for our 11.30pm departure. The night-time climb would take us up to Stella Point, which is on the crater’s rim, and after a rest we would make the final ascent to the summit.

A couple of hours into the fifth day (actually middle of the night) I realised that I was not feeling very well. I had a headache, I felt sick and I was feeling fatigued. It was dark, the temperature was -15°C and we were walking in clouds with only our headlights to show the way. Moisture was freezing on my clothes and any water spilled from my water bottle simply turned into icicles; I was struggling. After crossing a barrier of rocks the terrain became softer (like sand) and that made progress very tiring. The climb was relentless and the monotony of switchback after switchback was only broken when we stopped to witness the sun rise. It was unquestionably a spectacular sight but I felt too unwell to fully appreciate its splendour. The final approach to Stella point took us past the snout of the Rehmann glacier and after that we had to tackle a demanding 30 minute scramble up a steep scree slope. We arrived at Stella Point having been climbing for 8 and a half hours. It is at an altitude of 5,739 metres (18,829 feet) and I could see the summit in the distance.

Unfortunately, I was feeling so unwell and so fatigued that I began to question whether I could actually complete the climb. The roles had now been reversed and my friends were now helping me. With their encouragement I was able to summon all the willpower and determination that I could muster and carried on. We followed the crater rim for what seemed to be ages but it was probably little more than an hour. Eventually the summit became tangibly close and I knew that I could make it. At 9.15 am I was standing at Uhuru peak, the very highest point of Mount Kilimanjaro. I had my picture taken and 30 seconds later I was fast asleep, despite the intense cold and rocky ground that I had chosen as my bed! I did feel a bit better after my nap and quickly recovered as we began our steep descent to a lower altitude. We reached Mweka camp site at 6pm some 19 hours after setting out. Only then did I begin to fully appreciate my achievement.

Day six was our last on the mountain. The porters entertained us with impromptu singing and dancing and we all joined in. By early afternoon we had returned to the base of the mountain and for us the adventure was over. For our porters it was just a rest period before starting the next ascent with a new group of trekkers. It had been a great experience and the final few hours of the climb had taught me a lot about myself, about determination, about the will to succeed and about the value of friendship.

In reality the success of our climb must be attributed to our porters. They carried all the heavy and bulky equipment, they navigated the route, they cooked for us, they answered our questions and they kept us safe. It is their mountain and they had an encyclopaedic knowledge of its seasons, its geology, its wildlife and its plants. I’ve climbed Mount Kilimanjaro but I know that I’ve still got a lot to learn about the mountain and about the people who live and work around it. So I must finish with a big thank you to Johnson, Happiness, Arson, Godwin, Godlisten and all the other porters and guides. It was a privilege to have climbed Mount Kilimanjaro with them and with my friends.