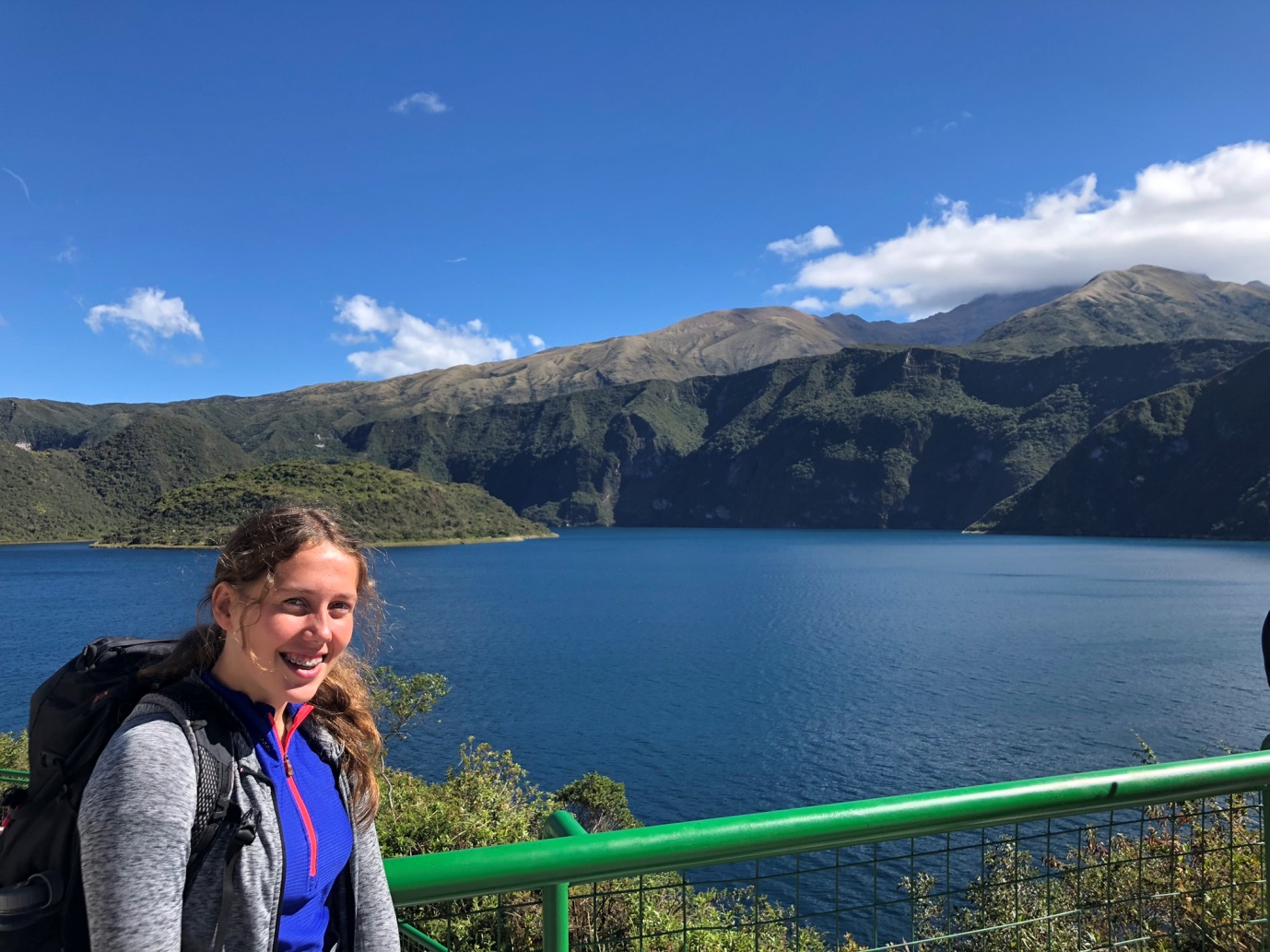 After 18 months of preparation which included working on the family farm both to raise funds and to increase my fitness, practising my Spanish and further fitness and team building work we set off on our journey across the Atlantic to arrive in Quito, the capital of Ecuador. Being the second highest capital in the world at just under 3000m, we needed to acclimatise. We dropped off the many boxes of donations we brought with us at a local charity and spent the first full day exploring the city. Quito was fascinating and we visited the ‘Mitad del Mundo’ monument which translates to the middle of the world and we were taught how to cook traditional food by Ecuadorian chefs.

Over the next two days we explored volcanos within the Andes in three different ways: cycling on mountain bikes around Cotopaxi volcana and hiking around and kayaking in Quilotoa lagoon. We then journeyed to the base of Chimborazo volcano –which is the greatest distance from the centre of the Earth- to arrive at Casa Condor.

During our days in the community, we helped by: mucking out the alpaca enclosures, shearing and herding the alpacas (I was offered a job as an alapaca shearer), planting native trees which were essential to the paramo ecosystem and harvesting potatoes. We also formed good relationships which the children within the community by playing games as well as singing and dancing with them. My enthusiasm to speak Spanish and the experience that I have had as a Young Leader with our local Cub Scout pack meant that I found that I could communicate very well with all ages.

We spent the next day in Alausi and experienced the iconic switchbacks of the Devils Nose train journey before we headed to Hacienda Releche to prepare for our trek. We set off in the morning and headed into Sanguay national park, the hike proved very challenging as we had to walk through knee deep mud for over two hours.

At about the halfway point we were clear of the worst of the mud and made much better progress, arriving to the mountain refuge at around 5 o’clock just before sunset. However, the group had split into two during the trek and the back group only arrived at 9 o’clock due to their difficulties in the mud and then having to negotiate the difficult terrain in the dark.

Because of these conditions, we didn’t summit El Altar the next day and the day after we began our descent back down the mountain.

After arriving in Baños, we journeyed to see the surrounding waterfalls including the Devils Cauldron at around 100m high and we took a cable car across the gorge to the Brides veil. That night we visited the thermal baths which give Baños its name.

The next morning we took the road which connects the Andes to the Amazon to arrive at the Jatunyacu River where we had an amazing time white water rafting down the rapids surrounded by spectacular views of the rainforest. We then had a short journey to our jungle lodge which also housed some friendly macaws. The next day we hiked into the rainforest where we saw some of the most amazing as well as the biggest plants and insects. We then walked up a river to a waterfall where we ate our lunch before heading to the home of one of local guides where we learnt what life was like living in the jungle.

After a full day of travel back to the capital, we set off to Otovalo market and the journey was an opportunity to try local cuisine as we stopped off at traditional food places on the way trying things such as guinea pig. The market was a really good experience and we were all able to practice our Spanish by bartering with the stall owners. We were also surprised to see Ben Fogle with his family in the market. On our way to the hacienda that evening we stopped at a music shop and learnt how to make pan pipes in the traditional way.

On our full final day, we hiked around the ridge of the Cotacachi volcano before making our way back to Quito for our celebratory meal. The next morning we spent in Quito which included going up the telegrafico to see the most spectacular view of the whole city, before we journeyed back home.

I am so grateful to have had the opportunity to spend 19 days in this amazing country surrounded by a fantastic group of people. Thank you so much.